A French Genocide: The Vendee (Hardcover) 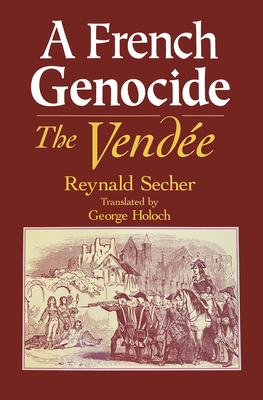 A French Genocide: The Vendee (Hardcover)

A French Genocide: The Vend e provides a detailed narrative of the civil war in the Vend e region of western France, which lasted for much of the 1790s but was most intensely fought at the the height of the Reign of Terror, from March 1793 to early 1795. In this shocking and controversial book, Reyanld Secher argues that the massacres which resulted from the conflict between patriotic revolutionary forces and those of the counter-revolution were not the inevitable result of fierce battle, but rather were premeditated, committed in cold blood, massive and systematic, and undertaken with the conscious and proclaimed will to destroy a well-defined region, and to exterminate and entire people. Drawing upon previously unavailable sources, Secher argues that more than 14 percent of the population and 18 percent of the housing stock in the Vend e was destroyed in this catastrophic conflict.

Secher's review of the social and political structure of the region presents a dramatically different image of the people on the Vend e than the stereotype common among historians favorable to the French Revolution. He demonstrates that they were not archaic and superstitious or even necessarily adverse to the forward-looking forces of the Revolution. Rather, the region turned agains the Revolution because of a series of misguided policy choices that failed to satisfy the desire for reform and offended the religious sensibilities of the Vend ans.

Using an array of primary sources, many from provincial archives, including personal accounts and statistical data, Secher convincingly argues for a demythologized view of the French Revolution. Contrary to most twentieth-century academic accounts of the Revolution, which have either ignored, apologized for, or explained away the Vend e, Secher demonstrates that the vicious nature of this civil war is a key element that forces us to reconsider the revolutionary regime. His work, available for the first time in English, provides a significant case study for readers interested in the relationships between religion, region, and political violence.

Reynald Secher is a scholar, businessman, and author of several books and articles. He produces historical videos, and is a specialist in the field of identity and national memory.