Affections of the Mind: The Politics of Sacramental Marriage in Late Medieval English Literature (Paperback) 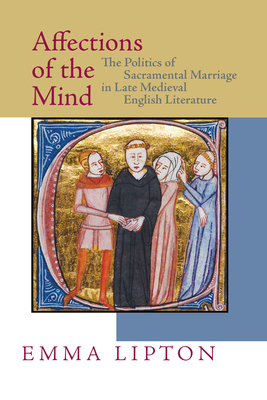 Affections of the Mind: The Politics of Sacramental Marriage in Late Medieval English Literature (Paperback)

Affections of the Mind argues that a politicized negotiation of issues of authority in the institution of marriage can be found in late medieval England, where an emergent middle class of society used a sacramental model of marriage to exploit contradictions within medieval theology and social hierarchy. Emma Lipton traces the unprecedented popularity of marriage as a literary topic and the tensions between different models of marriage in the literature of the later fourteenth and fifteenth centuries by analyzing such texts as Chaucer's Franklin's Tale, The Book of Margery Kempe, and the N-Town plays. Affections of the Mind focuses on marriage as a fluid and contested category rather than one with a fixed meaning, and argues that the late medieval literature of sacramental marriage subverted aristocratic and clerical traditions of love and marriage in order to promote the values of the lay middle strata of society. This book will be of value to a broad range of scholars in medieval studies.
Emma Lipton is assistant professor of English at the University of Missouri, Columbia.

“Lipton makes a case for viewing marriage as an idea and category of experience through which late-medieval people understood the world. The book as a whole offers interesting, often surprising, readings of literary works. Affections of the Mind reminds us to take a fresh look at the social significance that literary representations had in late-medieval England.” —Speculum: Journal of Medieval Studies

“With its nuanced attention to the ways that the discursive constructions of marriage and the social values of the middle social strata inflect one another, Lipton’s work elegantly illustrates how any analysis of gender and sexuality can be made richer and more precise by considering social status as well.” —Medieval Feminist Forum

“The interpretive theme informing Emma Lipton’s book . . . is that ‘marriage is a deeply political institution.’ The strength and interest of Lipton’s study rest in the nearly universal appeal of marriage, however practiced, as a trope (more precisely, a synecdoche) for the structure of relations and affections in the larger society; celebrated or deplored, marriage looks like a microcosm ready-made for social analysis, satire, and utopian or dystopian critique.” —Journal of English and Germanic Philology

“The strength of Affections of the Mind is in Lipton’s ability to apply the medieval arguments about marriage to literary texts and to contextualize this analysis within the social and economic changes of late medieval England. As such, it provides the reader with a solid grounding in the marriage debates as well as with individual readings of texts both widely known and more obscure. The book is a fine example of the interplay between history and literature, one that can be a model for future scholarship.” —Sixteenth Century Journal