Text in the Community: Essays on Medieval Works, Manuscripts, Authors, and Readers (Paperback) 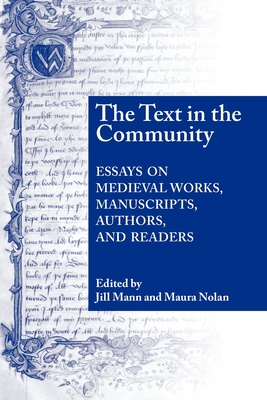 Text in the Community: Essays on Medieval Works, Manuscripts, Authors, and Readers (Paperback)

The Text in the Community brings together essays by a diverse group of medievalists to consider the multiple ways in which readers approach texts and manuscripts as part of communities of readers, authors, scribes, and scholars. The central premise of this volume is that texts do not exist in isolation. Each written work is embedded in contexts--literary, historical, geographical, social, political, and religious--and derives its meaning in part from the intersection of those contexts in the reader's experience of the text.

This collection is distinguished by a variety of approaches to the study of medieval texts and manuscripts and by the capacious time frame in which they are located, extending from the Anglo-Saxon period to the fifteenth century. Contributors demonstrate ways in which the insights gained from careful attention to the multiple dimensions, material as well as verbal, of medieval texts can extend and complicate our notions of the literary tradition, medieval reading practices and audiences, and modes of composition.

Maura Nolan is associate professor of English at the University of California, Berkeley.