Meditations on the Life of Christ: The Short Italian Text (Hardcover) 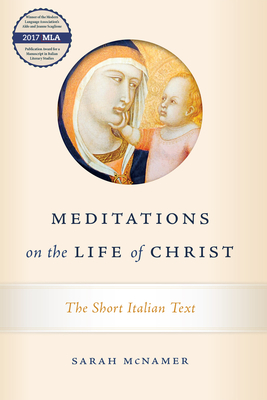 Meditations on the Life of Christ: The Short Italian Text (Hardcover)

The Meditations on the Life of Christ was the most popular and influential devotional work of the later Middle Ages. With its lively dialogue and narrative realism, its poignant and moving depictions of the Nativity and Passion, and its direct appeals to the reader to feel love and compassion, the Meditations had a major impact on devotional practices, religious art, meditative literature, vernacular drama, and the cultivation of affective experience.

This volume is a critical edition, with English translation and commentary, of a hitherto-unpublished Italian text that McNamer argues is likely to be the original version of this influential masterpiece. Livelier and far more compact than the Latin text, the Italian "short text" possesses a stylistic and textual integrity that appears to testify to its primacy among early versions of the Meditations. The evidence also suggests that it was composed by a woman, a Poor Clare from Pisa--an author whose work McNamer contends was obscured by the anonymous Franciscan friar who subsequently altered and expanded the text. In bringing to light this unique Italian version and building a case for its origins and importance, this book will encourage a fresh look at the Meditations and serve as a foundation for further scholarship and debate concerning some of the most compelling subjects in Italian and European literary and cultural history, including the role of women in the invention of new genres and spiritual practices, the early development of Italian prose narrative, the rise of vernacular theology, and the history of emotion.

McNamer's volume will be of significant interest to medievalists, especially those who study medieval women, devotional literature, manuscript studies, and textual criticism. The linguistic analysis expands that audience to include those of a philological bent.

Sarah McNamer is professor of English and medieval studies at Georgetown University. She is the author of Affective Meditation and the Invention of Medieval Compassion (2010).