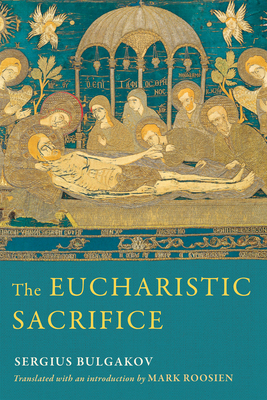 The debate around the controversial doctrine of the Eucharist as sacrifice has dogged relations between Catholic, Orthodox, and Protestant churches since the Reformation. In The Eucharistic Sacrifice, the famous Russian theologian Sergius Bulgakov cuts through long-standing polemics surrounding the notion of the Eucharist as sacrifice and offers a stunningly original intervention rooted in his distinctive theological vision. This work, written in 1940, belongs to Bulgakov's late period and is his last, and most discerning, word on eucharistic theology. His primary thesis is that the Eucharist is an extension of the sacrificial, self-giving love of God in the Trinity, or what he famously refers to as kenosis. Throughout the book, Bulgakov points to the fact that, although the eucharistic sacrifice at the Last Supper took place in time before the actual crucifixion of Christ, both events are part of a single act that occurs outside of time.

This is Bulgakov's concluding volume of three works on the Eucharist. The other two, The Eucharistic Dogma and The Holy Grail, were translated and published together in 1997. This third volume was only first published in the original Russian version in 2005 and has remained unavailable in English until now. The introduction provides a brief history of Bulgakov's theological career and a description of the structure of The Eucharistic Sacrifice. This clear and accessible translation will appeal to scholars and students of theology, ecumenism, and Russian religious thought.

Sergius Bulgakov (1871-1944) was one of the most prolific and original Eastern Orthodox theologians of the twentieth century, whose works continue to generate great scholarly interest among Orthodox and other Christians alike.Mark Roosien is a lecturer in liturgical studies at the Yale Institute of Sacred Music and Yale Divinity School.