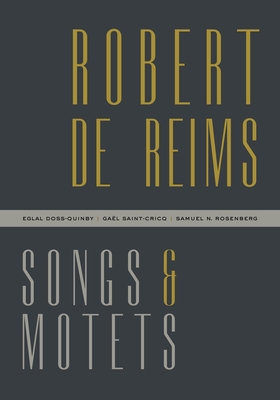 Robert de Reims, also known as "La Chievre de Rains," was among the earliest trouv res--poet-composers who were contemporaries of the troubadours but who wrote in the dialects of northern France. This critical edition provides new translations into English and modern French of all the songs and motets ascribed to him, along with the original texts, the extant music, and a substantive introduction.

Active sometime between 1190 and 1220, Robert was an influential figure in the literary circles of Arras. Thirteen compositions set to music are here attributed to him, including nine chansons and four polyphonic motets that were broadly disseminated in the thirteenth century and beyond. Robert's work is exceptional on a number of fronts. He lavished particular care on the phonic harmony of his words. Acoustic luxuriance and expertise in rhyming, grounded in the play of echoes and variation (often extending into the music), constitute the hallmark of his poetry. Moreover, he is the earliest trouv re known to have composed a parodic sotte chanson contre Amours (silly song against Love).

Located clearly at the nexus of monophonic song and polyphony, Robert's corpus also poses the intriguing question of trouv re participation in the development of the polyphonic repertory. The case of Robert de Reims jostles and tempers the standard history of the chanson and motet.

Accessible and instructive, this trilingual critical edition of his complete works makes the oeuvre of this innovative and consequential trouv re available in one volume for the first time.