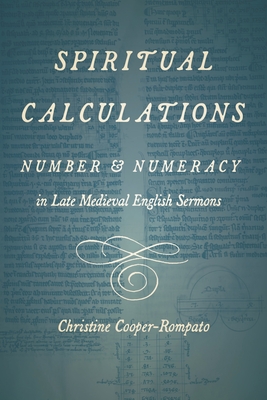 Medieval English sermons teem with examples of quantitative reasoning, ranging from the arithmetical to the numerological, and regularly engage with numerical concepts. Examining sermons written in Middle English and Latin, this book reveals that popular English-speaking audiences were encouraged to engage in a wide range of numerate operations in their daily religious practices.

Medieval sermonists promoted numeracy as a way for audiences to appreciate divine truth. Their sermons educated audiences in a hybrid form of numerate practice--one that relied on individuals' pragmatic quantitative reasoning, which, when combined with spiritual interpretations of numbers provided by the preacher, created a deep and rich sense in which number was the best way to approach the sacred mysteries of the world as well as to learn how one could best live as a Christian. Analyzing both published and previously unpublished sermonsand sermon cycles, Christine Cooper-Rompato explores the use of numbers, arithmetic, and other mathematical operations to better understand how medieval laypeople used math as a means to connect with God.

Spiritual Calculations enhances our understanding of medieval sermons and sheds new light on how receptive audiences were to this sophisticated rhetorical form. It will be welcomed by scholars of Middle English literature, medieval sermon studies, religious experience, and the history of mathematics.

Christine Cooper-Rompato is Professor of English and an affiliated member of Religious Studies at Utah State University. She is the author of The Gift of Tongues: Women's Xenoglossia in the Later Middle Ages, also published by Penn State University Press.