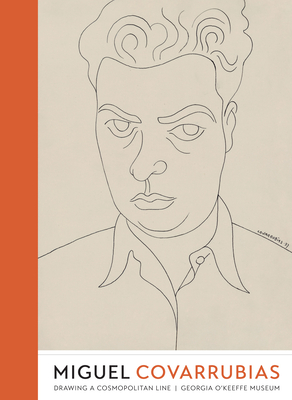 
This title is likely unavailable. Email or call for price and availability.
Miguel Covarrubias enjoyed transcultural encounters and exchanges in the cosmopolitan centers of Mexico City, New York, and Europe, where he met and exchanged ideas in a global network of modernists such as Georgia O’Keeffe. Famous for his caricature studies, he was also an accomplished painter, set designer, and book illustrator. Less well known are his consummate skills as an art historian, curator, cartographer, ethnographer, and documentary filmmaker, as well as his direction of programs in museum studies, dance, and the excavation of cultural sites in Mexico. Miguel Covarrubias: Drawing a Cosmopolitan Line, the catalogue of an exhibition at the Georgia O’Keeffe Museum, establishes the importance of Covarrubias’s broad-ranging and significant contributions to modern art. The book includes an extensive selection of this prolific artist’s compositions in graphite, watercolor, and oil paint, as well as illustrations from his scholarly publications. Four accompanying essays consider Covarrubias’s artistic practice and contributions to the richness of modern art. They discuss his lifelong habit of moving between modern cities and remote sites of ancient cultures, which engendered a strong cosmopolitanism in his work; his role in promoting the art of the Americas, from ancient Olmec works to contemporary pieces, through curatorial efforts in New York and Mexico City; the large-scale mural maps Covarrubias made for the 1939 San Francisco World’s Fair that bring his anthropological, ethnographic, and geographic interests together with cartography and blur lines between landscape and culture; and his substantial scholarship on the indigenous arts of North America.
CAROLYN KASTNER is Curator of the Georgia O’Keeffe Museum in Santa Fe, New Mexico.ALICIA INEZ GUZMÁN is a doctoral candidate in visual and cultural studies at the University of Rochester in Rochester, New York.KHRISTAAN D. VILLELA is Professor of Art History at Santa Fe University of Art and Design in Santa Fe, New Mexico.JANET CATHERINE BERLO is Professor of Visual and Cultural Studies at the University of Rochester in Rochester, New York.