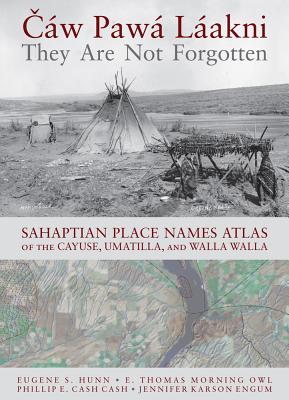 C w Paw L akni / They Are Not Forgotten is a book like none other. This ethnogeographic atlas of Native place names presents a compelling account of interactions between a homeland and its people. A project of the Tam stslikt Cultural Institute at the Confederated Tribes of the Umatilla Indian Reservation - composed of the Cayuse, Umatilla, and Walla Walla Tribes in eastern Oregon - C w Paw L akni documents and describes more than four hundred place names. The full-color, detailed maps and the narrative that introduces and supports them paint a picture of a way of life. This meticulous assemblage of memory and meaning echoes cultural and geographical information that has all but disappeared from common knowledge.

To create this historical and cultural atlas of the Cayuse, Umatilla, and Walla Walla homeland, which spans the Columbia River and its tributaries from southeastern Washington to northeastern Oregon, ethnographic, traditional, and institutional knowledge was gathered together and incorporated into a GIS database to produce customized maps that present this knowledge. Many of the accounts are from the individuals who traveled on horseback, lived in and saw these places, and possessed knowledge that can no longer be replicated. In presenting these place-names, the Tribes strive to ensure the vitality of this communal knowledge into the future.

In C w Paw L akni, places named in Indian languages are juxtaposed with sites that are central to the colonial period in the West, such as those described by the Lewis and Clark Expedition and those given to fur-trading posts, missions, and places on the Oregon Trail. The atlas adds a needed and vivid Native perspective to the written history and geography of Oregon and the West.