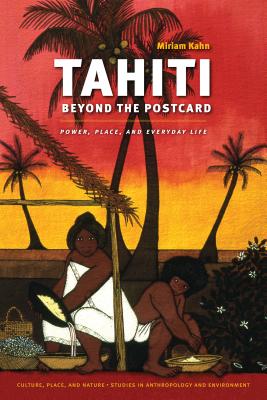 The "Tahiti" that most people imagine - white-sand beaches, turquoise lagoons, and beautiful women - is a product of 18th century European romanticism and persists today as the bedrock of Tahiti's tourism industry. This postcard image, however, masks a different reality. The dreams and desires that the tourism industry promotes distract from the medical nightmares and environmental destruction caused by France's 30-year nuclear testing program in French Polynesia. Tahitians see the burying of a bomb in their land as deeply offensive. For Tahitians, the land abounds with ancestral fertility, and genealogical identity, and is a source of physical and spiritual nourishment. These imagined and lived perspectives seem incompatible, yet are intricately intertwined in the political economy.

Tahiti Beyond the Postcard engages with questions about the subtle but ubiquitous ways in which power entangles itself in place-related ways. Miriam Kahn uses interpretive frameworks of both Tahitian and European scholars, drawing upon ethnographic details that include ancient chants, picture postcards, antinuclear protests, popular song lyrics, and the legacy of Paul Gauguin's art, to provide fresh perspectives on colonialism, tourism, imagery, and the anthropology of place.

Miriam Kahn is professor of anthropology at the University of Washington and author of Always Hungry, Never Greedy: Food and the Expression of Gender in a Melanesian Society and coauthor of Pacific Voices: Keeping Our Cultures Alive.