Empires of the Atlantic World: Britain and Spain in America 1492-1830 (Paperback) 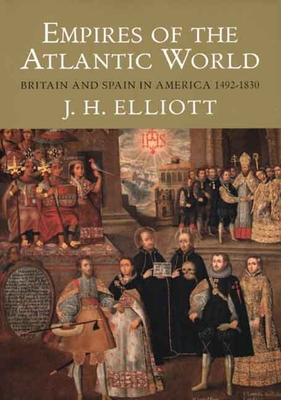 Empires of the Atlantic World: Britain and Spain in America 1492-1830 (Paperback)


This title is likely unavailable. Email or call for price and availability.
An enthralling account of the entwined histories of Britain, Spain, and their empires in the Americas

This epic history compares the empires built by Spain and Britain in the Americas, from Columbus’s arrival in the New World to the end of Spanish colonial rule in the early nineteenth century. J. H. Elliott, one of the most distinguished and versatile historians working today, offers us history on a grand scale, contrasting the worlds built by Britain and by Spain on the ruins of the civilizations they encountered and destroyed in North and South America. Elliott identifies and explains both the similarities and differences in the two empires’ processes of colonization, the character of their colonial societies, their distinctive styles of imperial government, and the independence movements mounted against them. Based on wide reading in the history of the two great Atlantic civilizations, the book sets the Spanish and British colonial empires in the context of their own times and offers us insights into aspects of this dual history that still influence the Americas.
J. H. Elliott is Regius Professor Emeritus of Modern History, University of Oxford. His previous books include The Count-Duke of Olivares, A Palace for a King (with Jonathan Brown), and Spain and Its World, 1500—1700, all published by Yale University Press. Among the many honors he has received are the Wolfson Prize for History, the Prince of Asturias Prize for the Social Sciences, and the Balzan Prize for History.

"[A] magisterial comparative history of empire of the Americas. . . . [A] richly textured comparative history. . . . [A] meticulously  researched and elegantly executed synthesis. . . . Mr. Elliott’s achievement is to identify with brilliant clarity the similarities and differences between British and Spanish America while embroidering his analysis with memorable details."—Niall Ferguson, Wall Street Journal


"[A] monumental analysis of two New World empires . . . Elliott . . . uses the story of each colonisation to illuminate the other. He challenges our prejudices about the Spanish conquest and the patriotic myths that have grown up around the English one. There is nothing black and white about this book. . . . Elliott's writing . . . moves with a gentle rhythm of a sea swell to carry the reader along."—Christian Tyler, Financial Times Magazine

"A handsome and fascinating study of the two colonisations, so different in their scope, duration and outcome. The contrasts in administration, treatment of the natives and economic viability are intriguing."—Christian Tyler, Financial Times Magazine

"My favorite recent book of American history is, perhaps surprisingly, by an English scholar of the history of Spain. A model of comparative history, Empires succeeds in placing the formative years of the area that became the United States in a consistently illuminating hemispheric perspective."—Eric Foner, New York Times Book Review

"Our current debate about immigration isn't only about clamping down on the U.S.-Mexican border. It's also about what it means to be an American after 9/11 and about how the nation is revamping the concept of citizenship. And it's an opportunity to reassess yet again, the relationship between the United States and its neighbors to the south, a chance to reflect on the role of Hispanic culture in the English-speaking world. For those eager to understand the historical context behind these issues, I know of no more comprehensive, readable source than J.H. Elliott's Empires of the Atlantic World. . . . A feast of insights."—Ilan Stavans, Washington Post Book World

"In a masterful account, Oxford don Elliott explores the simultaneous development of Spanish and English colonies in the so-called New World. . . . Elliott’s synthesis represents some of the finest fruits of the study of the Atlantic World."—Publishers Weekly

"Elliott's mastery of Spanish materials is especially impressive and allows him to show how Spanish America 'was large enough to provide the setting for a variety of holy experiments'. . . . It is refreshing to read, towards the end of this brilliant, compelling book, that in the British colonies 'a distinctively, American identity' was not so much the cause of revolution as the result."—Tom D'Evelyn, Christian Science Monitor

"So skilled . . . that it continually generates fresh insights forged out of familiar materials. . . . This is an indispensable and richly rewarding contribution to both the art of comparative history and the story of early America."—Richard R. Johnson, The Journal of American History

"Elliott has been writing about 'the old conundrum of the decline of Spain' with increasing skepticism since 1961, and his new Empires of the Atlantic World is in many ways the culmination of a lifetime's exploration of the riddle."—Matthew Restall, William and Mary Quarterly

"An essential addition to scholarship on the broader impact of imperialism in the Atlantic World."—K. David Milobar, History News Network

"A magisterial comparison of the Spanish and British empires in the Americas. . . . This story only hints at the scope and richness of Elliott's masterful comparative history."—Richard J. Ross, Law and History Review

"Insightful and illuminating. . . . Rich and delightful. . . . Complete with wonderful illustrations that are well integrated into the discussion."—Ian K. Steele, American Historical Review

"This book amazes. Covering the span of the imperial experience in the Americas, its combination of erudition and depth of insight is rarely matched. . . . The book will prove to be a magnum opus—thorough, thought-provoking, definitive."—William J. McCarthy, Nautical Research Journal

"Evocative. . . . From his very first chapter, Elliott does wonderful work in breaking down oversimplified characterizations of the Spanish empire as one of 'conquest' and Britain's one of 'commerce.' . . . Elliott is to be applauded and thanked, not only for his perseverance in writing this much-needed comparative review, but also for the verve and vision with which he infuses his smooth and insightful narrative."—Kristen Block, Itinerario

"J.H. Elliott's comparative study of English and Spanish colonization in the Americas is a sweeping synthesis that contributes significantly to our understanding of how European empires rose and fell from the sixteenth century to the early nineteenth."—Aaron Spencer Fogleman, New West Indian Guide

"A masterwork of synthesis. . . . Elliott brings a lifetime of research to bear on a reading of the two empires."—Robert Appelbaum, The Historian

"Unfailingly careful and completely convincing. This will be a classic; all that is needed now is time."—Leonard R.N. Ashley, Bibliotheque d'Humanisme et Renaissance

"Richly illustrated and based on a thorough and thoughtful reading in the vast literatures of British and Spanish America, [Elliott's] masterful synthesis is unlikely to be equaled—let alone surpassed—any time soon."—Carla Rahn Phillips, Eighteenth-Century Studies

"Sir John Elliott, the undisputed dean of Hispanic New World and Golden Age historians, brings his formidable knowledge to bear on this important topic. His access to documentation and his nuanced reading, subtle marshaling of the facts, and elegant prose come together in a book destined to be the standard reference in the field."—Virginia Quarterly Review

Selected as an Outstanding Academic Title for 2007 by Choice Magazine

Shortlisted for the 2006 Hessel-Tiltman History Prize, awarded by the English PEN Club

"Others have offered comparisons between the English- and Spanish-speaking worlds, but none have been as fully nuanced or fully realized as this. A masterpiece by one of the English-speaking world’s most accomplished historians."—David Weber, author of Bárbaros: Spaniards and Their Savages in the Age of Enlightenment

"Elliott’s close study of the empire the English founded in North America and the one that the Spanish built to the south has given him remarkable insights and perspectives. The result is to give new dimensions to the usable past of both Americas."—Edmund S. Morgan, author of Benjamin Franklin