An American Genocide: The United States and the California Indian Catastrophe, 1846-1873 (The Lamar Series in Western History) (Hardcover) 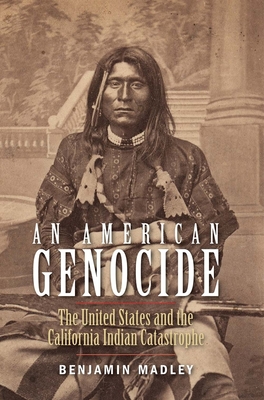 An American Genocide: The United States and the California Indian Catastrophe, 1846-1873 (The Lamar Series in Western History) (Hardcover)


This title is likely unavailable. Email or call for price and availability.
The first full account of the government-sanctioned genocide of California Indians under United States rule

“Gruesomely thorough. . . . Others have described some of these campaigns, but never in such strong terms and with so much blame placed directly on the United States government.”—Alexander Nazaryan, Newsweek

Between 1846 and 1873, California’s Indian population plunged from perhaps 150,000 to 30,000. Benjamin Madley is the first historian to uncover the full extent of the slaughter, the involvement of state and federal officials, the taxpayer dollars that supported the violence, indigenous resistance, who did the killing, and why the killings ended. This deeply researched book is a comprehensive and chilling history of an American genocide.

Madley describes pre-contact California and precursors to the genocide before explaining how the Gold Rush stirred vigilante violence against California Indians. He narrates the rise of a state-sanctioned killing machine and the broad societal, judicial, and political support for genocide. Many participated: vigilantes, volunteer state militiamen, U.S. Army soldiers, U.S. congressmen, California governors, and others. The state and federal governments spent at least $1,700,000 on campaigns against California Indians. Besides evaluating government officials’ culpability, Madley considers why the slaughter constituted genocide and how other possible genocides within and beyond the Americas might be investigated using the methods presented in this groundbreaking book.
Benjamin Madley is associate professor of history, University of California, Los Angeles, where he focuses on Native America, the United States, and genocide in world history. He lives in Los Angeles, CA.
"As Benjamin Madley writes in An American Genocide, by 1873, roaming bands of Indian-killers played a major role in reducing native numbers by more than 80 percent. . . . The mass murders raise the question: Did they constitute genocide by official design? [Madley] thinks so. He thoroughly documents the extent of the killings and their horrific consequences. . . . Emphasizing 'intention and repetition' in the California massacres, Madley [underscores] the designing role of state and federal officials."—Alan Taylor, New York Times Book Review, Editors’ Choice

"Gruesomely thorough. . . . Others have described some of these campaigns, but never in such strong terms and with so much blame placed directly on the United States government."—Alexander Nazaryan, Newsweek

"By removing any doubt that genocide against Native people took place in the most populous and prosperous state in the US, Madley is aiming for a profound revisioning of US history as a whole. . . . No longer will genocide be something that happened in some distant locale—Namibia, Germany, Cambodia or Rwanda. Instead, it took place in the same sunny clime that American culture has long celebrated with images of fun and frolic: Disney, Hollywood, the Beach Boys and surfers in search of the endless summer."—Karl Jacoby, Journal of Genocide Research

"An American Genocide has settled the issue on whether or not genocide occurred in California."—William Bauer Jr., Journal of Genocide Research

"Madley has written an intensely disturbing and invaluable account of the genocide that white Americans carried out against California’s Indian peoples. . . . Madley’s book should move historians of the American West to consider genocide studies as a serious framework for analysing settler–Indian relations, and it should also compel genocide studies scholars to reconsider their understandings of genocide."—Margaret D. Jacobs, Journal of Genocide Research

"[A] stellar example of an unflinching commitment to document and analyse . . . invasion’s often horrific consequences."—Jeffrey Ostler, Journal of Genocide Research

"Madley has documented his charge of genocide [with] prosecutorial ferocity . . . [His] appendices are the most complete incident-by-incident tally ever compiled of Indian lives lost during this terrible period. This scrupulously detailed epilogue is the equivalent of a memorial wall that we are visiting for the first time."—Peter Nabokov, New York Review of Books

"Madley moves with a scholar’s care across a terrible landscape . . . Essential reading."—Kirkus Reviews

"This is the definitive account of California’s genocide on which all future studies will be based."—Tony Platt, News from Native California

"Commanding. . . . No reader of his book can seriously contend that what happened in California doesn't meet the current definition of 'genocide.'"—Richard White, Stanford University, Nation

"An American Genocide raises fundamental questions about how Californians and Americans think of themselves and tell their history. . . . An American Genocide provides a powerful tool for historians and Native peoples—including those who are the descendants of genocide survivors—to challenge the founding myths of California and United States history."—Nicolas R. Rosenthal, Southern California Quarterly

"Vividly written, this exhaustively researched, abundantly illustrated and mapped, 362-page narrative in nine chapters, which includes 200 additional pages in eight appendixes and an extensive bibliography and index, will become the standard study of the near-extermination of California's Indians, 1864–73."—Choice

"Comprehensively researched and well-written. . . . An American Genocide courageously challenges the status quo—with primary sources—about how the state and federal government were involved in the decimation of the California Indian tribes."—True West

“Remarkable. . . . A book that should take a lasting place in the way we understand the U.S. and its relations to American Indian people.”—David A. Chang, American Historical Review

“Madley has produced a towering book that will long endure as a landmark text in California history. Among its many achievements, this painstakingly researched and thoroughly documented work provides by far the most complete and detailed account ever written about the murderous campaigns waged against Native peoples by the U.S. Army, the California state militia, local volunteer militia units, and irregular bands of self-appointed 'Indian fighters.'"—Michael F. Magliari, Ethnohistory

"Perhaps the most comprehensive case study of California's Indian genocide yet authored . . . Madley's detailed and exhaustive research makes his tome a bookend to decades of research seeking to prove that Native people experienced and survived genocide during the United States' colonial settlement of California."—Michel Karp, American Ninteenth Century History

"There is no questioning the importance of this book. . . . An American Genocide is an act of restorative justice. . . . Madley assures that some of the dead will not be forgotten, that history records many of their tragic deaths, and that fewer of the perpetrators avoid history’s judgement."—Steven W. Hackel, Journal of American History

"An American Genocide is an important text. Readers interested in Californian history, the gold rush, or Native American history will ﬁnd this text horrifying but useful . . .  Readers will be stunned and saddened when they read the 191 pages of tables that document killings, massacres, state militia campaigns, and U.S. Army operations against California Native Americans. This inventory of violence should be enough to convince skeptics that genocide did, indeed, occur in California."—Curtis Foxley, Journal of Native American and Indigenous Studies

“An American Genocide is an important addition to American history and genocide studies.”—Clifford Trafzer, Holocaust and Genocide Studies

“Madley . . . [offers] an amazing array of documentation to make his case. . . . An American Genocide is an important addition to American history and genocide studies.”—Clifford E. Trafzer, Holocaust and Genocide Studies

“Intense and well-researched, . . . ambitious, . . . magisterial. . . . Ostler’s swift-paced yet meticulous coverage of the wars and diasporas, great and small, and attendant fluctuations in native populations has been assembled as if he intends it to be his academic generation’s manifesto. . . . For many of us, I suspect, who have researched and taught Indian–white relations most of our lives, Surviving Genocide sets a bar from which subsequent scholarship and teaching cannot retreat.”—Peter Nabokov, New York Review of Books

"An American Genocide provides one of the most detailed and stunning narratives of violence, murder, and state-sponsored genocide in North America, making this book a major achievement in the fields of both Native American history and Genocide Studies."—Ned Blackhawk (Yale University), author of Violence Over the Land: Indians and Empires in the Early American West

"Madley has far exceeded previous scholarship in making a persuasive case for concluding that what happened to California Indians from 1846 to 1873 qualifies as genocide."—Jeffrey Ostler (University of Oregon), author of The Plains Sioux and U.S. Colonialism from Lewis and Clark to Wounded Knee

"This book is a powerful contribution to the study of Native Americans, to California history, and to genocide studies as a whole. It should be read by every Californian."—Norman Naimark (Stanford University), author of Stalin’s Genocides

"Benjamin Madley has changed the conversation on genocide and American Indians. After An American Genocide, it will no longer be possible to debate whether or not genocide took place. Instead we will need to confront the questions of how and why genocide against American Indians took place and what the United States owes its indigenous communities."—Karl Jacoby (Columbia University), author of Shadows at Dawn: A Borderlands Massacre and the Violence of History

"Benjamin Madley’s book is brilliant, unsettling, and necessary. It will change forever how we understand the history of California, and it will make historians of other places and periods wonder what they have missed. An American Genocide will have a long legacy."—Pekka Hämäläinen (Oxford University), author of The Comanche Empire