Mission France: The True History of the Women of SOE (Hardcover) 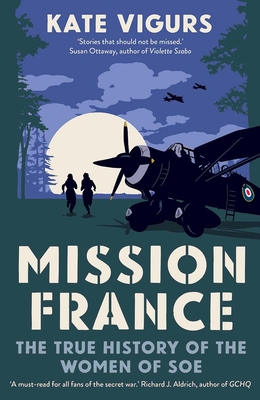 Mission France: The True History of the Women of SOE (Hardcover)


Available in Warehouse. Wait for Email Confirmation for ETA
The full story of the thirty-nine female SOE agents who went undercover in France

“The freshness and honesty of Mission France make it an ideal book for taking a new look at the secret war, at a time when knowledge of these brave women’s exploits is fading from living memory.”—Vin Arthey, The Scotsman

Formed in 1940, Special Operations Executive was to coordinate Resistance work overseas. The organization’s F section sent more than four hundred agents into France, thirty-nine of whom were women. But while some are widely known—Violette Szabo, Odette Sansom, Noor Inayat Khan—others have had their stories largely overlooked.

Kate Vigurs interweaves for the first time the stories of all thirty-nine female agents. Tracing their journeys from early recruitment to work undertaken in the field, to evasion from, or capture by, the Gestapo, Vigurs shows just how greatly missions varied. Some agents were more adept at parachuting. Some agents’ missions lasted for years, others’ less than a few hours. Some survived, others were murdered. By placing the women in the context of their work with the SOE and the wider war, this history reveals the true extent of the differences in their abilities and attitudes while underlining how they nonetheless shared a common mission and, ultimately, deserve recognition.
Kate Vigurs is a freelance historian, author, and academic advisor. Her PhD in history was at the University of Leeds and she is a frequent contributor for TV, radio, and the press.
Shortlisted for the 2021 Society for Army Historical Research Best First Book Prize

‘Apart from a few names, those of all the women who became SOE agents in France are largely unknown. But, in her compelling new book, Kate Vigurs has brought together the stories of all the women’s triumphs and tragedies. Stories that should not be missed.’ —Susan Ottaway, author of Violette Szabo: The Life that I Have

"Thirty-nine ordinary women reacting to extraordinary circumstances… Eschewing the glamorous image so often foisted on to the women of the SOE, Vigurs offers a cooler, more perceptive insight into varieties of courage.” —Siân Rees, author of Lucie Aubrac: The French Resistance Heroine Who Defied the Gestapo

‘Mission France is an important addition to the story of the female agents of SOE’s F Section. It handles the history of these women by means of compassionate analysis and successfully avoids the hagiographical approach so favoured by other writers.’ —Mark Seaman, author of Undercover Agent: How one of SOE’s youngest agents helped defeat the Nazis

‘A riveting and brilliantly researched account of 39 women agents of SOE. Vigurs takes us on a journey of intrigue, betrayal, escape and sometimes tragedy. A must-read for all fans of the secret war, it is the definitive account of the secret underworld of occupation.’ —Richard J. Aldrich, author of GCHQ: The Uncensored Story of Britain's Most Secret Intelligence