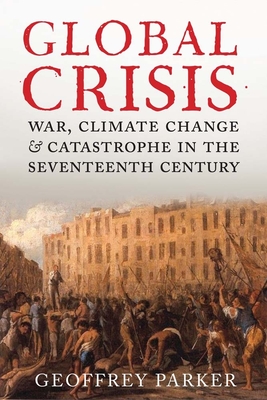 How to account for decades of worldwide war, revolution, and human suffering in the seventeenth century? A master historian uncovers the disturbing answer.

Revolutions, droughts, famines, invasions, wars, regicides – the calamities of the mid-seventeenth century were not only unprecedented, they were agonisingly widespread.  A global crisis extended from England to Japan, and from the Russian Empire to sub-Saharan Africa. North and South America, too, suffered turbulence. The distinguished historian Geoffrey Parker examines first-hand accounts of men and women throughout the world describing what they saw and suffered during a sequence of political, economic and social crises that stretched from 1618 to the 1680s. Parker also deploys scientific evidence concerning climate conditions of the period, and his use of ‘natural’ as well as ‘human’ archives transforms our understanding of the World Crisis. Changes in the prevailing weather patterns during the 1640s and 1650s – longer and harsher winters, and cooler and wetter summers – disrupted growing seasons, causing dearth, malnutrition, and disease, along with more deaths and fewer births. Some contemporaries estimated that one-third of the world died, and much of the surviving historical evidence supports their pessimism.

Parker’s demonstration of the link between climate change and worldwide catastrophe 350 years ago stands as an extraordinary historical achievement.  And the contemporary implications of his study are equally important: are we at all prepared today for the catastrophes that climate change could bring tomorrow?

The winner of the 2012 Heineken Prize for History, Geoffrey Parker is Andreas Dorpalen Professor of History and Associate of the Mershon Center at The Ohio State University. He lives in Columbus, OH.
"Mr. Parker tells [the story] with verve. . . . [his] novel interpretation, emphasizing climate instead of individual agency, helps to explain socio-economic change and revolution in ways that future historians will inevitably have to take into account."—Wall Street Journal

"The author sets out to examine a century in which weather patterns radically altered and political, social and economic crises seemed to engulf every part of the world. What relationship does a changing climate bear to global stability? There could scarcely be a more timely question to ask. Parker deploys a dazzling breadth of scholarship in answering it."—Dan Jones, Times

"In his monumental new book . . . Parker’s approach is systematic and painstaking . . . giv[ing] us a rich and emotionally intense sense of how it felt to live through chaotic times."—Lisa Jardine, Financial Times


"Global Crisis is a magnum opus that will remain a touchstone in three areas for at least a generation: the history of the entire globe, the role of climate in history, and the identification of a major historical crisis in the seventeenth century. . . . Wide-ranging, monumental works of history are rare; this is one of them."—Theodore K. Rabb, Times Literary Supplement


"In this vast, superbly researched and utterly engrossing book, Parker shows how climate change pushed the world towards chaos. . . . Parker’s book is not merely powerful and convincing, it is a monument to scholarly dedication."—Dominic Sandbrook, Sunday Times


"[A] staggeringly researched, rivetingly written and intellectually dazzling book. . . . I expect it to be read and debated for decades to come."—Sunday Times


"A work of formidable erudition and scope from a renowned British authority on early modern history."—Financial Times

"My big book of the year has been Geoffrey Parker’s Global Crisis on the disastrous war-torn 17th century. It fills in gaps, gives different perspectives—not least on Scotland during the Civil War—and opens new areas of history to explore."—Catriona Graham, The Guardian

“Enormous research efforts have gone into the writing of this book, an incisive analysis of historical and climatological events during the seventeenth century. . . This is a fascinating book that every politician and bureaucrat should read to see in past mistakes things that must be avoided.”
—Madra Sivaraman, Environmental Studies

"One of the books I found most informative and most perversely enjoyable this year is Geoffrey Parker’s Global Crisis:  War, Climate Change and Catastrophe in the Seventeenth Century. It deserves, and rewards, careful reading."—Jane Smiley, Harper’s

"The clarity with which Parker, a British historian, has assembled a wealth of material makes this long book difficult to put down. The entire world of the 1660s seems only a heartbeat away."—Patricia Anderson, Australian


"A must read that shows how climate change 350 years ago can serve as a harbinger of the possible human consequences of today's rapidly changing climate. Essential. All levels/libraries."—Choice

"This is a colossal book, literally and metaphorically. Reading it reminded me of the exhilaration of first reading Braudel’s Mediterranean and the Mediterranean World in the Age of Philip II. Parker’s book has the same combination of rich detail, global reach and a simple but powerful argument that can change how we see an entire period. Like Braudel’s, Parker’s writing is deft, vivid and rich enough to carry the reader along on the book’s grand tour of the chilly, conflict-ridden world of the 'General Crisis.'"—David Christian, Journal of Military History

"Parker’s great book challenges all future political and military historians to integrate the study of tree rings and glacier cores into their work. And it challenges his readers to think hard about whether humanity in the 21st century will be any less vulnerable than it was in the 17th to sudden disruptions of the environment on which we depend for our subsistence fully as much as did our ancestors of 400 years ago."—David Frum, Atlantic

"Parker’s book amounts to a heady challenge for all historians of the early modern world, none of whom have put as much stock in climate variables, and few of whom can write about the big picture with the authority that he brings."—J.R. McNeill, Public Books

"Not only a powerful case for the role of climate change in inducing crises in human history by also a blistering attack against the prevailing 'culture of denial' . . . plenty of food for thought for generalists and specialist alike."—Markus Vink, Journal of Modern History

"This colossal study accomplishes something the epics of Gilgamesh and Noah never could; It convincingly links a truly global climate disaster to an epidemic of wars and rebellions that shook the whole world."—American Historical Review

"The bibliography contains works in Catalan, Chinese, Czech, Dutch, English, French, German, Italian, Japanese, Latin, Portuguese, Polish, Rumanian, Russian, Spanish, Swedish, Turkish, as well as what I take to be Malay and Yiddish. This Stakhanovite approach to research sets a regrettable standard against which nearly every living historian would be judged wanting."—J.R. McNeill, Historically Speaking

Winner of one of the 2012 Heineken Prizes

Selected as a Choice Outstanding Academic Title for 2013 in the History, Geography, & Area Studies Category

Received an Honorable Mention for the 2013 American Publishers Awards for Professional and Scholarly Excellence (PROSE), in the European & World History category

"Geoffrey Parker's Global Crisis is at once a revelation and a provocation. By examining a period of unusual climatic perturbation Parker helps us better understand our own era of climate change. Few indeed are the works of history that are so urgently relevant to the present and the future."—Amitav Ghosh, author of The Great Derangement

"Geoffrey Parker has deployed the human archive for climate change during the seventeenth century in a masterly synthesis of history and paleoclimatology that helps us redefine the impact of the Little Ice Age on humanity. The Global Crisis is a beautifully written, masterly work of multidisciplinary history, which draws on an amazing range of sources. Parker’s work opens up exciting new avenues for historical inquiry and has direct relevance to today’s debates over climate change and humanity."—Brian Fagan, Emeritus Professor of Anthropology, University of California, Santa Barbara, and author of The Little Ice Age

"Geoffrey Parker’s Global Crisis is an extraordinarily ambitious attempt to write world history "from the bottom up". Based on long decades of work, and eschewing the facile solution of just drawing on secondary literature, Parker once more shows his grasp of varied archives and texts for which he is celebrated. He draws them together around a complex yet powerful thesis linking climate, military power and political change in the seventeenth century. Learned and argumentative, yet written with subtlety, wit and panache, his book will set the bar for the next generation of students and scholars who want to write history on this scale."—Sanjay Subrahmanyam, University of California at Los Angeles

"Parker has given us the most profound and global account of the pivotal seventeenth century, from its revolutions and rebellions to scientific and constitutional breakthroughs.  As we enter a new era of global climate change, this gripping book provides a wondrous portrait of a similar age and a stern warning."—Jack A. Goldstone, author of Why Europe? The Rise of the West in World History 1500-1850

"A world-altering force [that] has been emerging, one larger, more devastating, and more definitive than the any other 'turn' in recent historiography: 'I speak of climate change—or climate collapse—and all of its related global transformations.'"—Julia Adeney Thomas, American Historical Review