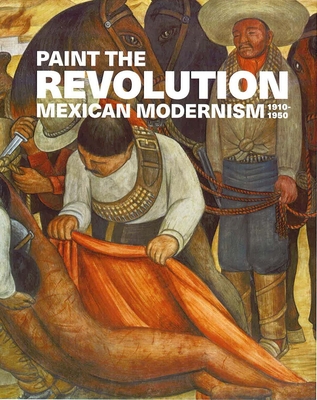 
This title is likely unavailable. Email or call for price and availability.
A comprehensive look at four transformative decades that put Mexico’s modern art on the map

In the wake of the 1910–20 Revolution, Mexico emerged as a center of modern art, closely watched around the world. Highlighted are the achievements of the tres grandes (three greats)—José Clemente Orozco, Diego Rivera, and David Alfaro Siqueiros—and other renowned figures such as Rufino Tamayo and Frida Kahlo, but the book goes beyond these well-known names to present a fuller picture of the period from 1910 to 1950.

Fourteen essays by authors from both the United States and Mexico offer a thorough reassessment of Mexican modernism from multiple perspectives. Some of the texts delve into thematic topics—developments in mural painting, the role of the government in the arts, intersections between modern art and cinema, and the impact of Mexican art in the United States—while others explore specific modernist genres—such as printmaking, photography, and architecture. This beautifully illustrated book offers a comprehensive look at the period that brought Mexico onto the world stage during a period of political upheaval and dramatic social change.
Matthew Affron is the Muriel and Philip Berman Curator of Modern Art at the Philadelphia Museum of Art. Mark A. Castro is a project assistant curator at the Philadelphia Museum of Art. Dafne Cruz Porchini is exhibition curator for the Museo del Palacio de Bellas Artes and postdoctoral researcher, Colegio de México, Mexico City. Renato González Mello is the director of the Instituto de Investigaciones Estéticas at the Universidad Nacional Autónoma de México, Mexico City.
"[T]he images in the book are so vibrant and striking they practically beg the reader to learn more by reading the astute essays. Perfect for both the art scholar on your list or anyone who has an inquisitive mind."—Kirkus Reviews