The Portable Atheist: Essential Readings for the Nonbeliever (Paperback) 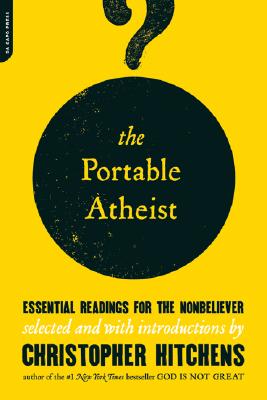 By Christopher Hitchens
$19.99
Email or call for price.

Christopher Hitchens's personally curated New York Times bestselling anthology of the most influential and important writings on atheism, including original pieces by Salman Rushdie and Ian McEwan
From the #1 New York Times best-selling author of God Is Not Great, a provocative and entertaining guided tour of atheist and agnostic thought through the ages--with never-before-published pieces by Salman Rushdie, Ian McEwan, and Ayaan Hirsi Ali.Christopher Hitchens continues to make the case for a splendidly godless universe in this first-ever gathering of the influential voices--past and present--that have shaped his side of the current (and raging) God/no-god debate. With Hitchens as your erudite and witty guide, you'll be led through a wealth of philosophy, literature, and scientific inquiry, including generous portions of the words of Lucretius, Benedict de Spinoza, Charles Darwin, Karl Marx, Mark Twain, George Eliot, Bertrand Russell, Emma Goldman, H. L. Mencken, Albert Einstein, Daniel Dennett, Sam Harris, Richard Dawkins, and many others well-known and lesser known. And they're all set in context and commented upon as only Christopher Hitchens--"political and literary journalist extraordinaire" (Los Angeles Times)--can. Atheist? Believer? Uncertain? No matter: The Portable Atheist will speak to you and engage you every step of the way.

Christopher Hitchens was a contributing editor to Vanity Fair and a visiting professor of liberal studies at the New School. He is the author of numerous books, including works on Thomas Jefferson, Thomas Paine, George Orwell, Mother Teresa, Bill and Hillary Clinton, Henry Kissinger, and his #1 New York Times bestseller and National Book Award nominee, God Is Not Great.

"Those objections and the writings Hitchens assembles to buttress them will surely bring on new controversies which is just the sort of thing on which he has thrived over a long and fruitful career."
—Kirkus

"MY PRAYERS ARE answered! I'd always wanted a 500-page paperback crammed with arguments against the existence of God--and now, thanks to Christopher Hitchens, that tireless proselytizing rationalist, here it is."
—Adam Begley, New York Observer

"A fascinating collection of articles that just say no to religion...Required reading for anyone who believes, disbelieves, or just isn't sure yet."
—People "Critic's Choice"

"A great Christmas gift for anybody who doens't believe in Christmas. In fact, it's the closest thing to heaven a confirmed atheist is likely to find."
—Sunday Mercury

"Hitchens has returned to the Belief Wars backed by a full army...The Godless Warrior marshals in an Atheist A-Team."
—San Diego Union Tribune

"Should be sufficient fodder for anyone uncomfortable with the notion of a creator."
—Hartford Courant