Persian Fire: The First World Empire and the Battle for the West (Paperback) 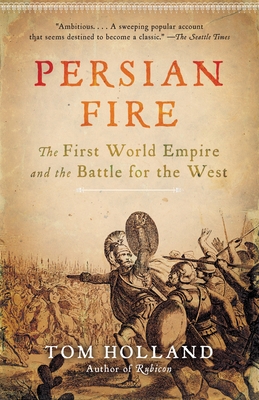 Persian Fire: The First World Empire and the Battle for the West (Paperback)


Backordered - ETA Unknown
In the fifth century B.C., a global superpower was determined to bring truth and order to what it regarded as two terrorist states. The superpower was Persia, incomparably rich in ambition, gold, and men. The terrorist states were Athens and Sparta, eccentric cities in a poor and mountainous backwater: Greece. The story of how their citizens took on the Great King of Persia, and thereby saved not only themselves but Western civilization as well, is as heart-stopping and fateful as any episode in history. Tom Holland’s brilliant study of these critical Persian Wars skillfully examines a conflict of critical importance to both ancient and modern history.
Tom Holland is a historian of the ancient world and a translator. His books include Rubicon: The Triumph and Tragedy of the Roman Republic, Persian Fire, In the Shadow of the Sword and The Forge of Christendom. He has adapted Homer, Herodotus, Thucydides and Virgil for the BBC. In 2007, he was the winner of the Classical Association prize, awarded to “the individual who has done most to promote the study of the language, literature and civilization of Ancient Greece and Rome.” He lives in London with his family.
Visit the author's website at www.tom-holland.org.
“Ambitious....a sweeping popular account that seems destined to become a classic.” —The Seattle Times“Excellent. . . . There is an even-handedness in Holland’s treatment of both Greek and Persian cultural riches that is rare in popular accounts of these wars.” —Sunday Times“Holland has a rare eye for detail, drama, and the telling anecdote. . . . A book as spirited and engaging as Persian Fire deserves to last.” —The Telegraph