The Gangs of New York: An Informal History of the Underworld (Paperback) 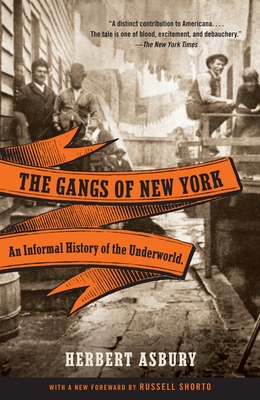 The Gangs of New York: An Informal History of the Underworld (Paperback)

The basis of Martin Scorcese's acclaimed 2003 film, The Gangs of New York is a dramatic and entertaining glimpse at a city's dark past.

Focusing on the saloon halls, gambling dens, and winding alleys of the Bowery and the notorious Five Points district, The Gangs of New York dramatically evokes the destitution and shocking violence of a turbulent era, when colorfully named criminals like Dandy John Dolan, Bill the Butcher, and Hell-Cat Maggie lurked in the shadows, and infamous gangs like the Plug Uglies, the Dead Rabbits, and the Bowery Boys ruled the streets. A rogues' gallery of prostitutes, pimps, poisoners, pickpockets, murderers, and thieves, Herbert Asbury's whirlwind tour through the low life of nineteenth-century New York has become an indispensible classic of urban history.

Herbert Asbury, an early 20th-century journalist, made a name for himself by documenting the gangs, pimps, prostitutes, and thieves that thrived in the underbellies of New York, Chicago, San Francisco, and New Orleans. His works, still in print after seventy-five years, are often hailed as the best snapshots of their time period. The Gangs of New York was the basis of Martin Scorcese's 2003 film.

"A distinct contribution to Americana. . . . The tale is one of blood, excitement, and debauchery.”
—The New York Times

"One of the essential works of the city. . . . It owns a direct pipeline to the city's unconscious.”
—Luc Sante, author of Low Life: Lures and Snares of Old New York

“A univeral history of infamy, the history of the gangs of New York contains all the confusion and cruelty of the barbarian cosmologies.”
—Jorge Luis Borges

“One of the best American books of its kind. Mr. Asbury writes in a direct and engaging manner.”
—Edmund Pearson, The Saturday Review of Literature