Wisdom: From Philosophy to Neuroscience (Paperback) 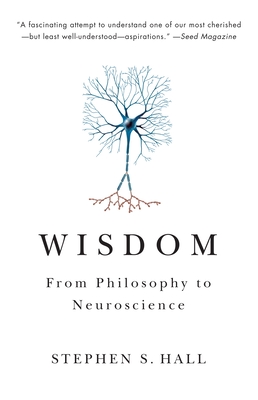 Wisdom: From Philosophy to Neuroscience (Paperback)

We all recognize wisdom, but defining it is more elusive. In this fascinating journey from philosophy to science, Stephen S. Hall gives us a penetrating history of wisdom, from its sudden emergence in the fifth century B.C. to its modern manifestations in education, politics, and the workplace. Hall’s bracing exploration of the science of wisdom allows us to see this ancient virtue with fresh eyes, yet also makes clear that despite modern science’s most powerful efforts, wisdom continues to elude easy understanding.

For twenty-five years, Stephen S. Hall has written about the intersection of science and society in books, magazine articles, and essays, primarily in The New York Times Magazine. He is the author of five previous critically acclaimed books, including Invisible Frontiers and Merchants of Immortality. He has received numerous awards, including in 2004 the Science in Society Journalism Award for book writing from the National Association of Science Writers and, in 1998, the William B. Coley Award from the Cancer Research Institute. In addition to science, Hall has written extensively about travel, baseball, and Italy. He lives in Brooklyn, New York, with his wife and two children.

“A fascinating attempt to understand one of our most cherished—but least well-understood-aspirations.”
—Seed Magazine

“With the flair of an experienced science journalist, Hall takes us on a rollicking interdisciplinary journey through the ages, blending modern science, history and philosophy. . . . Highly readable.”
—Nature Neuroscience

“A comprehensive and thought-provoking book that examines the difficult topic of wisdom in a fair—even wise—manner.”
—Science News

“Utterly engaging. . . . Hall’s work as a translator and intermediary between the humanities and the hard neurosciences is in itself a feat of extraordinary mental balance and understanding.”
—The Post and Courier

“Wisdom is a golden-ticket tour of the human mind, in all its dimensions, led by one of the most insightful and trustworthy science journalists we’ve ever had. This book is a feast, not a snack. Get ready to digest more smart brain science than you ever thought possible.”
—David Shenk, author of The Genius in All of Us: Why Everything You’ve Been Told About Genetics, Talent, and IQ Is Wrong

“Astonishingly wise, incredibly well written and most importantly wonderfully synthetic. One can disagree with some of the parts but few will disagree with the whole. Wisdom is still with us.”
—Michael Gazzaniga, author of Human: The Science Behind What Makes Us Unique

“Steve Hall has done it again. He masterfully explains how ‘wisdom’ comes out of the brain without oversimplifying this enormously complex topic.”
—Joseph LeDoux, Synaptic Self: How Our Brains Become Who We Are

“With erudition and literary skill, Stephen Hall brings us a powerful and perceptive synthesis of the contributions made by philosophers, theologians, and 21st century scientists to humankind’s ages-old search for the sources of wisdom. As a work of insight and art, this is indeed a wise book.”
—Sherwin Nuland, author of How We Die: Reflections of Life’s Final Chapter