There Is Power in a Union: The Epic Story of Labor in America (Paperback) 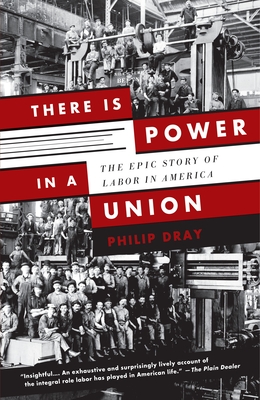 There Is Power in a Union: The Epic Story of Labor in America (Paperback)

From the nineteenth-century textile mills of Lowell, Massachusetts, to the triumph of unions in the twentieth century and their waning influence today, the contest between labor and capital for the American bounty has shaped our national experience.

In this stirring new history, Philip Dray shows us the vital accomplishments of organized labor and illuminates its central role in our social, political, economic, and cultural evolution. His epic, character-driven narrative not only restores to our collective memory the indelible story of American labor, it also demonstrates the importance of the fight for fairness and economic democracy, and why that effort remains so urgent today.

Philip Dray is the author of At the Hands of Persons Unknown: The Lynching of Black America, which won the Robert F. Kennedy Book Award and was a finalist for the Pulitzer Prize. His book Capitol Men: The Epic Story of Reconstruction Through the Lives of the First Black Congressmen was a New York Times Notable Book and received the Peter Seaborg Award for Civil War Scholarship. He lives in Brooklyn, New York.

“Insightful. . . . An exhaustive and surprisingly lively account of the integral role labor has played in American life.”
—The Plain Dealer

“Engrossing. . . . A memorable and accurate history, one that reminds us of the honorable part labor played in the quest for what its advocates grandly but not inaccurately called ‘industrial democracy.’”
—The Washington Post

“Ambitious. . . . It’s a big colorful tale, and Dray has a gift for characterization as he tells the stories of dramatic figures such as Mother Jones and Jimmy Hoffa, and dramas such as the Haymarket Riot and the Triangle Shirtwaist Fire.”
—Chicago Tribune

“One of the great values of this beautifully written book is that it shows the centrality of labor and working-class organizations to America itself. . . . Dray comes into the ring with fists flying, and he doesn’t let up for a moment. If you love Howard Zinn’s A People’s History of the United States you’ll probably love Dray’s history, too.”
—San Francisco Chronicle

“Dray provides a grand context for thinking about labor-management relations in a society beset by bad will within millions of workplaces. . . . He is a refreshing chronicler of history.”
—Minneapolis Star Tribune

“A stirring study. . . . Packed with vivid characters and dramatic scenes, Dray’s fine recap of a neglected but vital tradition has much to say about labors current straits.”
—The Washington Examiner

“An exemplary history of the American labor movement, from its time-shrouded beginnings to its murky present . . . in the tradition of Eric Foner and Studs Terkel.”
—Kirkus Reviews (starred)

“The unending struggle between unions and big business has never been more vividly told. Philip Dray is a marvelous story teller who brings history memorably alive, and you will not soon forget the tales of murder and greed, commitment and sacrifice, that fill these pages. But this is more than history; the compelling saga of labor as a crucible for social change should prompt some honest and hard debate about what’s happening to working men and women today.”
—Bill Moyers

“Sobering. . . . This unusually interesting book delivers on the promise of its subtitle. . . . [Dray] offers a balanced and comprehensive coverage of a force for American progress that is now in danger of becoming a relic of our storied past.”
—America Magazine

“Philip Dray’s big and bold history of organized labor in America splendidly retells a story—or a multitude of stories—badly in need of retelling. The labor movement’s decline in recent decades has accompanied a great national amnesia about all that the movement achieved for the nation. That amnesia threatens those achievements, so Dray’s book is timely as well as gripping.”
—Sean Wilentz, author of The Rise of American Democracy

"Any union leader working to define and strengthen the role of organized labor in the 21st century must read There Is Power in a Union, a comprehensive and fascinating history of the American labor movement."
—Michael Winship, President, Writers Guild of America, East (AFL-CIO)

"The American labor movement has been losing ground for three decades but its history is heroic and inspiring - full of scenes of dramatic, often bloody conflict. It would be hard to imagine a better account of those episodes of collective effort, personal courage, and fierce resistance than this engrossing narrative."
—Morris Dickstein, author of Dancing in the Dark: A Cultural History of the Great Depression

"From the Lowell Mills of antebellum America to the global assembly lines of our own day, Philip Dray offers a panoramic narrative of the work and struggle, the triumph and tragedy, that has been the fate of trade unionism in the United States. His lively and insightful history belongs on the shelf and in the hands of all those who want to organize ourselves out of the social and economic predicament in which the nation now finds itself."
—Nelson Lichtenstein, Professor of History and Director of the Center for the Study of Work, Labor, and Democracy at the University of California, Santa Barbara