Cults, Conspiracies, and Secret Societies: The Straight Scoop on Freemasons, The Illuminati, Skull and Bones, Black Helicopters, The New World Order, and many, many more (Paperback) 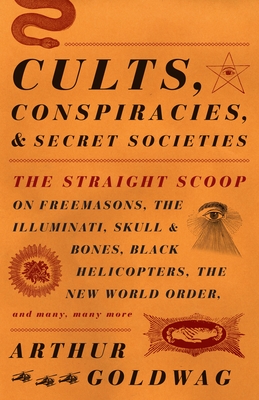 Cults, Conspiracies, and Secret Societies: The Straight Scoop on Freemasons, The Illuminati, Skull and Bones, Black Helicopters, The New World Order, and many, many more (Paperback)


Backordered - ETA Unknown
Did you know?

• The Knights Templar began as impoverished warrior monks then evolved into bankers.

An indispensable guide, Cults, Conspiracies, and Secret Societies connects the dots and sets the record straight on a host of greedy gurus and murderous messiahs, crepuscular cabals and suspicious coincidences. Some topics are familiar—the Kennedy assassinations, the Bilderberg Group, the Illuminati, the People's Temple and Heaven's Gate—and some surprising, like Oulipo, a select group of intellectuals who created wild formulas for creating literary masterpieces, and the Chauffeurs, an eighteenth-century society of French home invaders, who set fire to their victims' feet.

Arthur Goldwag is the author of Isms and Ologies and The New Hate. A freelance writer and editor for more than twenty years, he has worked at Book-of-the-Month Club (where he created Traditions, a club devoted to Jewish interests), as well as at Random House and The New York Review of Books.

“The kind of reference manual that the Internet cannot supplant . . . Goldwag keeps the facts straight and gives the rumors -- no matter how lurid and entertaining -- about as much respect as they deserve.”—The Washington Post

“Arthur Goldwag is a shrewd, fair minded, learned and entertaining tour guide through a world that’s simultaneously funny and frightening. Not a page goes by without some “I-didn’t-know-that!” nugget. Given what’s going on this ever-more-paranoid society, a book like this becomes not only titillating but crucially important.”—Steven Waldman, Editor-in-Chief and co-founder of Beliefnet.com

“The answer to your burning questions about subjects from Area 51 to the Yakuza.”—Details

“Goldwag is a colorful writer who makes good use of his material as he aims to explain, rather than debunk or expose, a fascinating diversity of beliefs.”—Boston Globe

“The author’s delivery is engaging and entertaining. The amount of research done in this book is astounding. . . . An incredibly insightful, thoroughly enjoyable look at society’s shadow.”—Armchair Interviews

“Goldwag navigates his way through the wilder reaches of human belief with great urbanity.”
—Mark Booth, author of The Secret History of the World: As Laid Down by the Secret Societies

“As entertainingly written as it is enlightening.”
—Phillip Lopate