The Book of General Ignorance (Hardcover) 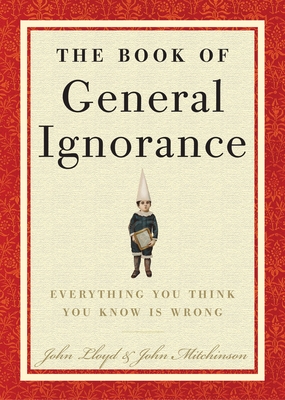 The Book of General Ignorance (Hardcover)


Available in Warehouse. Wait for Email Confirmation for ETA
NEW YORK TIMES BESTSELLER • Misconceptions, misunderstandings, and flawed facts finally get the heave-ho in this humorous, downright humiliating book of reeducation based on the phenomenal British bestseller.

Challenging what most of us assume to be verifiable truths in areas like history, literature, science, nature, and more,The Book of General Ignorance is a witty “gotcha” compendium of how little we actually know about anything. It’ll have you scratching your head wondering why we even bother to go to school.

Think Magellan was the first man to circumnavigate the globe, baseball was invented in America, Henry VIII had six wives, Mount Everest is the tallest mountain? Wrong, wrong, wrong, and wrong again. You’ll be surprised at how much you don’t know! Check out The Book of General Ignorance for more fun entries and complete answers to the following:

How long can a chicken live without its head?
About two years.

What do chameleons do?
They don’t change color to match the background. Never have; never will. Complete myth. Utter fabrication. Total Lie. They change color as a result of different emotional states.

How many legs does a centipede have?
Not a hundred.

How many toes has a two-toed sloth?
It’s either six or eight.

Who was the first American president?
Peyton Randolph.

What were George Washington’s false teeth made from?
Mostly hippopotamus.

What was James Bond’s favorite drink?
Not the vodka martini.
JOHN LLOYD is the producer of the hit British comedy shows Not the Nine O’Clock News, Blackadder, and Spitting Image.JOHN MITCHINSON writes for the British television show QI, and drinks in the same pub as John Lloyd.
“Trivia buffs and know-it-alls alike will exult to find so much repeatable wisdom gathered in one place.”
—New York Times

“The Book of General Ignorance won’t make you feel dumb. It’s really a call to be more curious.”
—The Associated Press

“Ignorance may be bliss, but so is learning surprising information.”
—Hartford Courant

“You, too, can banish social awdwardness by having its endless count of facts and factoids at the ready. Or you could just read it and keep what you learned to yourself. Betcha can’t.”
—New York Daily News

“To impress friends with your cleverness, beg, borrow or buy John Lloyd and John Mitchinson’s The Book of General Ignorance, an extraordinary collection of 230 common misperceptions compiled for the BBC panel game QI (Quite Interesting).”
—Financial Times

“This book would make even Edison feel small and silly, for it offers answers to questions you never thought to ask or had no need of asking as you already knew, or thought you knew, the answer.”
—The Economist

“Trivia books, like any kind of mental or physical addiction, are both irresistible and unsatisfying. By the standards of the genre, this one has something approaching the force of revelation. Answering silly questions suddenly seems less important than taking the trouble to ask a few.”
—Melbourne Age

“Eye-watering, eyebrow-raising, terrific . . . moving slightly faster than your brain does, so that you haven’t quite absorbed the full import of one blissful item of trivial information before two or three more come along. Such fine and creative research genuinely deserves to be captured in print.”
—Daily Mail

“This UK bestseller redefines ‘common knowledge’ with factoids that will inform and entertain (or at least liven up your next cocktail party).”
–OK! Magazine