Sex on the Moon: The Amazing Story Behind the Most Audacious Heist in History (Paperback) 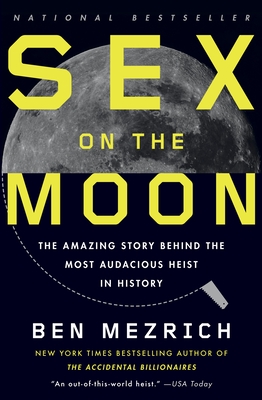 Sex on the Moon: The Amazing Story Behind the Most Audacious Heist in History (Paperback)

From the bestselling author of The Accidental Billionaires and Bringing Down the House, this is the incredible true story of how a college student and two female accomplices stole some of the rarest objects on the planet—moon rocks—from an "impregnable" high-tech vault.

But breaking into a highly secure laboratory wasn't easy. Thad Roberts, an intern in a prestigious NASA training program, would have to concoct a meticulous plan to get past security checkpoints, an electronically locked door with cipher security codes, and camera-lined hallways even before he could get his hands on the 600-pound safe. And then how was he supposed to get it out? And what does one do with an item so valuable that it's illegal even to own? With his signature high-velocity style, Mezrich reconstructs the outlandish heist and tells a story of genius, love, and duplicity that reads like a Hollywood thrill ride.

“Movie-worthy treatment to the guy who stole moon rocks from NASA.”
—The New York Daily News

“Mezrich is a genius at using characters and dialogue. . . to turn nonfiction into something as compelling as any thriller.”
—The Chronicle Herald

“[An] in-depth look at Thad Roberts, who along with three other NASA interns, stole pieces of lunar rock to impress his girlfriend. Mezrich has done extensive research to recreate the story of how an aspiring astronaut ended up getting caught for stealing over 100 pieces of the moon.”
—The Atlantic Monthly

“A fast and furious read, powered along by Mezrich’s desire never to take his eyes off the story.”
—Chicago Post-Tribune

“A breathless, credulous style. . . . memorable supporting characters. . . . adventure, sex, romance, a hero who is equal parts Clifford Irving from The Hoax, Frank Abagnale from Catch Me If You Can, and George Bailey from It’s a Wonderful Life.”
—The Boston Globe

“Eloquent prose and a direct view into the characters’ mind. . . the access to Roberts and re-creation of his motivation and personality are Sex On The Moon’s best qualities.”
—The Onion

“[A] fascinating story. . . . has the readability of popular fiction, a ripping story, and great characters. . . . Another winner from an extremely talented writer.”
—Booklist, starred review

“Ben Mezrich, the gonzo-inspired biographer of Ivy League geeks. . . . [brings us a] stranger-than-fiction, true-life thriller of a man who went where no man has gone before. . . . [the] story ticked all the boxes: a charismatic dreamer with a troubled past, a Romeo-and-Juliet love story, a geek-alicious high-tech setting, an ingenious Oceans 11-style heist—and perhaps the most boneheaded mistake any man ever made to impress a girl. Even better, it was a journalist’s Holy Grail: a truly uncovered story.”
—BookPage

“Ben Mezrich goes to incredible lengths to bring readers a story that is both accurate and spellbinding, honest and riveting.”
—Portsmouth Wire

“This is the incredible story of a crime truly out of this world, told with verve by Mezrich.”
—News of the World