Dying to Quit: Why We Smoke and How We Stop (Singular Audiology Text) (Hardcover) 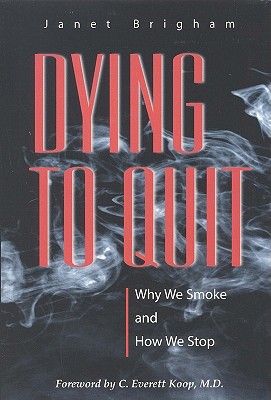 Dying to Quit: Why We Smoke and How We Stop (Singular Audiology Text) (Hardcover)

Historians and scientists a few millennia from now are likely to see tobacco as one of the major bafflements of our time, suggests Janet Brigham. Why do we smoke so much, even when we know that tobacco kills more than a million of us a year?

Two decades ago, smoking was on the decline in the United States. Now the decline has flattened, and smoking appears to be increasing, most ominously among young people. Cigar smoking is on the rise. Data from a generation of young smokers indicate that many of them want to quit but have no access to effective treatment.

Dying to Quit features the real-life smoking day of a young woman who plans to quit?again. Her comments take readers inside her love/hate relationship with tobacco. In everyday language, the book reveals the complex psychological and scientific issues behind the news headlines about tobacco regulations, lawsuits and settlements, and breaking scientific news.

What is addiction? Is there such a thing as an addictive personality? What does nicotine do to the body? How does it affect the brain? Why do people stand in subzero temperatures outside office buildings to smoke cigarettes? What is the impact of carefully crafted advertisements and marketing strategies? Why do people who are depressed tend to smoke more? What is the biology behind these common links? These and many fundamental questions are explored drawing on the latest findings from the world's best addictions laboratories.

Want to quit? Brigham takes us shopping in the marketplace of gizmos and gadgets designed to help people stop smoking, from wristwatch-like monitors to the lettuce cigarette. She presents the bad news and the not-so-bad news about smoking cessation, including the truth about withdrawal symptoms and weight gain. And she summarizes authoritative findings and recommendations about what actually works in quitting smoking.

By training a behavioral scientist?by gift a writing talent?Brigham helps readers understand what people feel when they use tobacco or when they quit. At a time when tobacco smoke has filled nearly every corner of the earth and public confusion grows amid strident claims and counterclaims in the media, Dying to Quit clears the air with dispassion toward facts and compassion toward smokers. This book invites readers on a fascinating journey through the world of tobacco use and points the way toward help for smokers who want to quit.

Janet Brigham, Ph.D., is a research psychologist with SRI International in Menlo Park, California, where she studies tobacco use. A former journalist and editor, she has conducted substance use research at the Johns Hopkins University School of Medicine, the National Institute on Drug Abuse, and the University of Pittsburgh