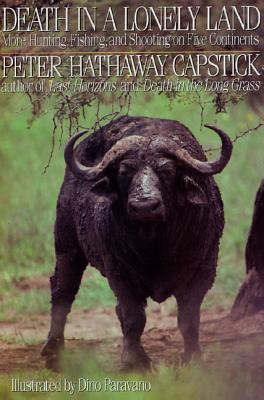 From the author of Last Horizons, Peter Hathaway Capstick now presents Death in a Lonely Land, a second volume of his hunting, fishing, and shooting adventures on five continents—stories collected from such magazines as Outdoor Life, NRA’s American Hunter, Guns & Ammo, and Petersen’s Hunting.

The stockbroker-turned-outdoorsman recalls his days as an African pro hunter in “The Killer Baboons of Vlackfontein.” “Four Fangs in a Treetop” records a foray into British Honduras for the jaguar, “a gold-dappled teardrop of motion.” Capstick narrowly escapes the Yellow Beard, Central America’s deadly tree-climbing snake, and cows “The Black Death” (Cape buffalo) in the kind of article that makes this author “the guru of American hunting fans” (New York Newsday). On Brazil’s forsaken Marajo Island, he bags the pugnacious red buffalo, which has the “temperament of a constipated Sumo wrestler and the tenacity of an IRS man.”

Featuring more than thirty gorgeous drawings by famous wildlife artist Dino Paravano, Death in a Lonely Land is another collector’s item by a writer who “keeps the tradition of great safari adventure alive in each of his books” (African Expedition Gazette).