Bootleg: The Secret History of the Other Recording Industry (Paperback) 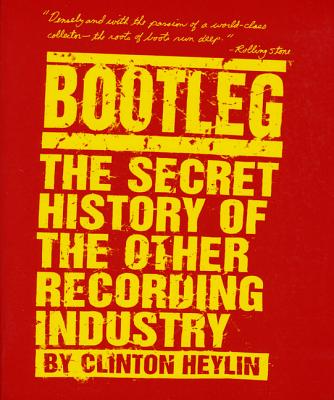 Bootleg: The Secret History of the Other Recording Industry (Paperback)

In Bootleg: The Secret History of the Other Recording Industry, Clinton Heylin examines the entire modern history of this underground culture: from what defines a bootleg and its complex and protean legal status, to a full history of bootlegs' production and distribution, to what's contained on some of the most notorious bootlegs and how to find them. Along with many illustrations of the creative packages, this is the whole story of the $250 million industry that sustains itself on the great figures of rock music and their biggest admirers.

Clinton Heylin is the cofounder of Wanted Man, the British information office dedicated to studying Dylan's life and work. He is the author of "Bob Dylan: Behind the Shades,"" From the Velvets to the Voidoids,"" "and "Bob Dylan: The Recording Sessions 1960-1964".

“Bootleg is the thoroughly researched and highly entertaining tale of those colorful brigands, hapless amateurs and true believers who have done wonders for my record collection. Rock & roll doesn't get more underground than this.” —David Fricke, music editor, Rolling Stone

“The copy of 'GWW' that I bought on Telegraph Avenue in 1969 still sits proudly by my desk. Fascinating now to read this history of rock's demimondes.” —Chet Flippo

“With its unholy mix of consumerism, conspiracy, fetishism, and felony, Clinton Heylin's secret history of bootlegging is enough to restore one's faith in the subversive spirit of rock 'n' roll.” —David Dalton

“Bootleg fans may ultimately consider this book nearly as crucial as Hot Wacks, a directory of underground titles...” —Billboard

“Full of arcane information and firsthand testimony, as well as a stream of anecdotal nuggets from the underground...” —Los Angeles Weekly

“Heylin methodically punctures each and every record industry argument against bootlegging, while acknowledging that bootleggers themselves are often without the purest motives.” —Los Angeles Reader