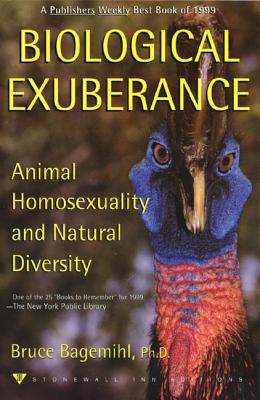 Lavishly illustrated and meticulously researched, filled with fascinating facts and astonishing descriptions of animal behavior, Bruce Bagemihl's Biological Exuberance is a landmark book that will change forever how we look at nature.

Homosexuality in its myriad forms has been scientifically documented in more than 450 species of mammals, birds, reptiles, insects, and other animals worldwide. Biological Exuberance is the first comprehensive account of the subject, bringing together accurate, accessible, and nonsensationalized information. Drawing upon a rich body of zoological research spanning more than two centuries, Bagemihl shows that animals engage in all types of nonreproductive sexual behavior. Sexual and gender expression in the animal world displays exuberant variety, including same-sex courtship, pair-bonding, sex, and co-parenting—even instances of lifelong homosexual bonding in species that do not have lifelong heterosexual bonding.

Part 1, "A Polysexual, Polygendered World," begins with a survey of homosexuality, transgender, and nonreproductive heterosexuality in animals and then delves into the broader implications of these findings, including a valuable perspective on human diversity. Bagemihl also examines the hidden assumptions behind the way biologists look at natural systems and suggests a fresh perspective based on the synthesis of contemporary scientific insights with traditional knowledge from indigenous cultures.

Part 2, "A Wondrous Bestiary," profiles more than 190 species in which scientific observers have noted homosexual or transgender behavior. Each profile is a verbal and visual "snapshot" of one or more closely related bird or mammal species, containing all the documentation required to support the author's often controversial conclusions.

Bruce Bagemihl, Ph.D., is a biologist and researcher who has served on the faculty of the University of British Columbia, where he taught linguistics and cognitive science. He is the author of Biological Exuberance and has published diverse essays and scientific articles on issues pertaining to language, biology, gender, and sexuality. He lives in Seattle, Washington.

“A scholarly, exhaustive, and utterly convincing refutation of the notion that human homosexuality is an aberration in nature . . . Bagemihl does realize that some among us will never be convinced that homosexuality occurs freely and frequently in nature. But his meticulously gathered, cogently delivered evidence will quash any arguments to the contrary.” —Kirkus Reviews

“A brilliant and important exercise in exposing the limitations of received opinion . . . an exhaustively argued case that animals have multiple shades of sexual orientation.” —Publishers Weekly

“Bagemihl has done an extraordinary job in compiling a vast bestiary . . . This book should surely become the standard reference work for research on the topics covered.” —Nature

“A landmark in the literature of science.” —Chicago Tribune

“By producing a work that is accessible to the general reader while engaging for the specialist, Bagemihl has accomplished a most extraordinary feat. In the tradition of the finest nonfiction, this is a book that will force us to reexamine who we are and what we believe.” —The Philadelphia Inquirer

“For anyone who has ever doubted the 'naturalness' of homosexual, bisexual, and transgendered behaviors, this remarkable book, which demonstrates and celebrates the sexual diversity of life on earth, will surely lay those doubts to rest. The massive evidence of the wondrous complexity of sexuality in the natural world that Bagemihl has marshaled will inform, entertain, and persuade academic and lay readers alike. Biological Exuberance is a revolutionary work.” —Lillian Faderman, author of Odd Girls and Twilight Lovers: A History of Lesbian Life in Twentieth-Century America