The Actor Speaks: Voice and the Performer (Paperback) 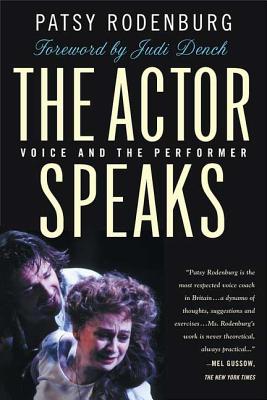 The Actor Speaks: Voice and the Performer (Paperback)

In The Actor Speaks, Patsy Rodenburg takes actors and actresses, both professional and beginners, through a complete voice workshop. She touches on every aspect of performance work that involves the voice and sorts through the kinds of vexing problems every performer faces onstage: breath and relaxation; vocal range and power; communication with other actors; singing and acting simultaneously; working on different sized stages and in both large and small auditoriums; approaching the vocal demands of different kinds of scripts. This is the final word on the actor's voice and it's destined to become the classic work on the subject for some time to come.

Patsy Rodenburg, OBE, has been the Director of Voice at the prestigious Guildhall School of Music and Drama in London for 26 years and until recently at the Royal National Theatre. She trained in Voice Studies at the Central School of Speech and Drama and is recognized as one of the world's leading voice teachers and coaches, and also as a renowned authority on Shakespeare. Patsy has worked regularly with the best-known actors of the British theatre, including Judi Dench, Ian McKellen, and Daniel Day-Lewis, to name a few, as well as many of the biggest stars of film and television such as Nicole Kidman, Orlando Bloom, Hugh Jackman, and Natalie Portman. She was previously in residence with the Royal Shakespeare Company for 9 years and has worked with The Royal Court Theatre, Donmar and Almeida Theatre in London. She has also worked extensively with many of the great world theaters such as the Moscow Art Theatre and Comédie-Francaise. Patsy's home in America is at the renowned Michael Howard Studios in New York City where she teaches workshops for the professional actor. Under the Michael Howard Studios banner. She travels around the world teaching and speaking, from Los Angeles to Canada to Portugal to Australia, and in November 2012, will bring her expertise to India. Patsy is also a best-selling author whose notable publications include Speaking Shakespeare, The Right to Speak, The Need For Words, The Actor Speaks, The Second Circle, and Power Presentation.

Dame Judi Dench, one of the foremost actors of our day, has won the Oscar, the Tony and the Olivier award. She is the author of the book And Furthermore.

“Patsy Rodenburg wants to free your voice so that you can express yourself fully and honestly.” —Sir Ian McKellen