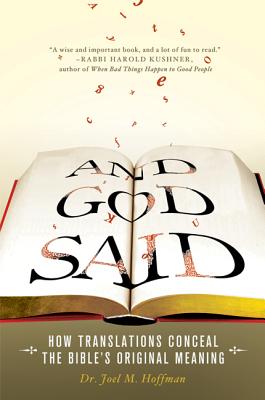 For centuries, translations of the Bible have obscured our understanding and appreciation of the original text. Now And God Said provides readers with an authoritative account of significant mistranslations and shows how new translation methods can give readers their first glimpse into what the Bible really means.

And God Said uncovers the often inaccurate or misleading English translations of the Hebrew Bible and the New Testament that quotes from it. Sometimes the familiar English is just misleading. Other times the mistakes are more substantial. But the errors are widespread. This book tackles such issues as what's wrong with the Ten Commandments (starting with the word "commandments"), the correct description of the "virgin" birth, and the surprisingly modern message in the Song of Solomon, as well as many other unexpected but thought-provoking revelations.

Acclaimed translator Dr. Joel M. Hoffman sheds light on the original intention of the text and the newly developed means that readers can use to get closer to it. In And God Said his fresh approach has united the topics of religion, language, and linguistics to offer the first modern understanding since the Bible was written.

JOEL M. HOFFMAN, PhD, is the author of In the Beginning: A Short History of the Hebrew Language and And God Said: How Translations Conceal the Bible's Original Meaning. He is the chief translator for the 10-volume series, My People's Prayer Book (winner of the National Jewish Book Award) and for My People's Passover Haggadah. He is an occasional contributor to The Jerusalem Post and The Huffington Post, and has held faculty appointments at Brandeis University and at Hebrew Union College-Jewish Institute of Religion. He lives in New York.

“A sensitive . . . discussion of the structure of languages in general and of Biblical Hebrew in particular.” —The Jerusalem Post

“A lively tour of the difficulties besetting the Bible's translators, their successes and (more frequent) failures.” —Jewish Ideas Daily

“A wise and important book, and a lot of fun to read.” —Rabbi Harold Kushner, author of When Bad Things Happen to Good People

“Hoffman is wise and gentle as he exhibits the issue of distortion by way of translation. Short of all readers learning Hebrew, Hoffman's work is the best gift for a careful reader of a text that defies easy contemporary rendering.” —Walter Brueggemann, author of The Prophetic Imagination

“[Hoffman] unites Biblical scholarship and translation theory, embracing modern science and modern linguistics, to help us understand what the Prophets and our forebears were doing and how they wrote. He retrieves what the Bible really was and what it can be for us now.” —The Very Reverend James A. Kowalski, The Cathedral Church of Saint John the Divine

“Hoffman has a flair for explaining how languages work.” —The Times Literary Supplement (London) on In The Beginning

“Written in an energetic style with a commitment to exploring the evolution of Hebrew from ancient times to the present in ways that a broad audience can comprehend.” —Religious Studies Review on In The Beginning