The Lady in Red: An Eighteenth-Century Tale of Sex, Scandal, and Divorce (Paperback) 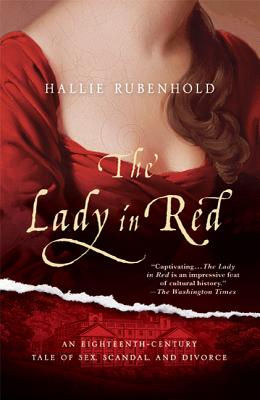 The Lady in Red: An Eighteenth-Century Tale of Sex, Scandal, and Divorce (Paperback)

She was a spirited young heiress. He was a handsome baronet with a promising career in government. The marriage of Lady Seymour Dorothy Fleming and Sir Richard Worsley had the makings of a fairy tale—but ended as one of the most scandalous and highly publicized divorces in history.

In February 1782, England opened its newspapers to read the details of a criminal conversation trial in which the handsome baronet Sir Richard Worsley attempted to sue his wife's lover for an astronomical sum in damages. In the course of the proceedings, the Worsleys' scandalous sexual arrangements, voyeuristic tendencies, and bed-hopping antics were laid bare. The trial and its verdict stunned society, but not as much as the unrepentant behavior of Lady Worsley.

Sir Joshua Reynolds captured the brazen character of his subject when he created his celebrated portrait of Lady Worsley in a fashionable red riding habit, but it was her shocking affairs that made her divorce so infamous that even George Washington followed it in the press. Impeccably researched and written with great flair, Hallie Rubenhold's The Lady in Red is a lively and moving true history that presents a rarely seen picture of aristocratic life in the Georgian era.

Hallie Rubenhold was born in Los Angeles to a British father and an American mother. She is a young British art historian and writer whose first book, The Covent Garden Ladies, created a small sensation when it was published in the UK in 2005. She lives in London.

“Hallie Rubenhold's captivating new cultural history gives an account of one of this century's strangest marital scandals, the tale of the adulterous Lady Seymour Worsley and her vengeful husband, Sir Richard Worsley. . . . Ms. Rubenhold's book brings to life the dissipated and alluring world of aristocratic Georgian England, particularly its vexed sexual morality, through the story of a marriage and its unraveling . . . an impressive feat.” —Washington Times

“Because the market is saturated with eighteenth-century bodice biographies, most indistinguishable from the next, [The Lady in Red] should come with a warning: nothing else in the genre is close to being this good. As a historian and a storyteller, Hallie Rubenhold is in a league of her own. She keeps you glued to the very last page when, exhausted, exasperated, and elated, you can at last put the book down and get yourself some sleep.” —Frances Wilson, Literary Review (UK)

“The story of the Worsley divorce has never been revealed before, and Hallie Rubenhold tells it with panache. Her account of the elopement is gripping, but this is far more than an eighteenth-century bodice ripper. Rubenhold combines narrative skill with historical expertise, and she traces the knife edge that women walked between social success and public disgrace with subtlety and assurance.” —The Spectator (UK)

“[The Lady in Red] is told as a mystery, with Rubenhold keeping up the suspense and providing some surprises along the way. . . . In this thoughtfully crafted ‘tale of sex, scandal, and divorce' she shows how Lady Worsley's sexual energies carried her through to a kind of triumph.” —The Times Literary Supplement (UK)

“[Rubenhold] has an eye for an antique story . . . [and] is sure footed in her research . . . Her special forte is rakes and roués: her depiction of Coxheath Camp, where the country's militias gathered for months as a glorified Home Guard, idling and fornicating, is deliciously lurid.” —The Sunday Times (UK)

“This is a fabulous eighteenth-century tale of sex, scandal, and divorce, and Hallie Rubenhold tells it beautifully.” —The Telegraph (UK)