A Crown of Swords: Book Seven of 'The Wheel of Time' (Hardcover) 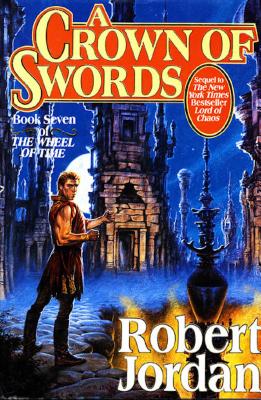 A Crown of Swords: Book Seven of 'The Wheel of Time' (Hardcover)

This is book number 7 in the Wheel of Time series.

Elayne, Aviendha, and Mat come ever closer to the bowl ter'angreal that may reverse the world's endless heat wave and restore natural weather. Egwene begins to gather all manner of women who can channel--Sea Folk, Windfinders, Wise Ones, and some surprising others. And above all, Rand faces the dread Forsaken Sammael, in the shadows of Shadar Logoth, where the blood-hungry mist, Mashadar, waits for prey.

“You can't talk about epic fantasy without acknowledging the titanic influence Robert Jordan has had on the grenre.” —Jason Denzel, author of Mystic and founder of Dragonmount.com

Praise for A Crown of Swords

“The seventh volume of Jordan's bestselling high fantasy series carries on the ... colossal, dauntingly complex storytelling established by the previous entries ... Fans of the series will gobble down this generous addition.” —Publishers Weekly (starred review)

“In the long-awaited sequel to the bestselling Lord of Chaos, Jordan returns to the [same] complex, detailed fantasy world ... Highly recommended ...” —Library Journal

“In the seventh volume of Jordan's preeminent high fantasy saga, intrigue and counter-intrigue continue to roil ... This latest installment of a major fantasy epic definitely will not disappoint its fans.” —Booklist