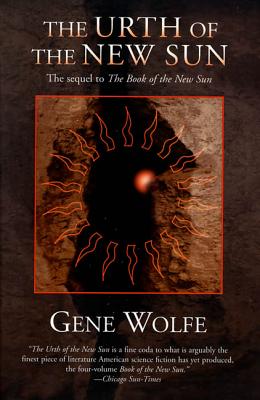 A Hugo and Nebula Award nominee, The Urth of the New Sun is the long awaited sequel to science fiction Grand Master Gene Wolfe's four-volume classic, The Book of the New Sun.

We return to the world of Severian, now the Autarch of Urth, as he leaves the planet on one of the huge spaceships of the alien Hierodules to travel across time and space to face his greatest test, to become the legendary New Sun or die.

The strange, rich, original spaceship scenes give way to travels in time, wherein Severian revisits times and places which fill in parts of the background of the four-volume work, that will thrill and intrigue particularly all readers of the earlier books. But The Urth of the New Sun is an independent structure all of a piece, an integral masterpiece to shelve beside the classics, one itself.

Gene Wolfe (1931-2019) was the Nebula Award-winning author of The Book of the New Sun tetralogy in the Solar Cycle, as well as the World Fantasy Award winners The Shadow of the Torturer and Soldier of Sidon. He was also a prolific writer of distinguished short fiction, which has been collected in such award-winning volumes as Storeys from the Old Hotel and The Best of Gene Wolfe.

A recipient of the World Fantasy Award for Life Achievement, the Edward E. Smith Memorial Award, and six Locus Awards, among many other honors, Wolfe was inducted into the Science Fiction Hall of Fame in 2007, and named Grand Master by the Science Fiction and Fantasy Writers of America in 2012.

“The Urth of the New Sun is a fine coda to what is arguable the finest piece of literature American science fiction has yet produced, the four-volume Book of the New Sun.” —Chicago Sun-Times

“Gene Wolfe's new book soars, falls free, runs like the river that runs through it from universe to universe, between life and death and life again. The groundnote of it all is human pain, so that this fantasy has the weight of vision.” —Ursula K. Le Guin

“Gene Wolfe's four-volume magnum opus, The Book of the New Sun, is one of the modern masterpieces of imaginative literature--an evocation of a world so far in the future that magic and technology, poetry and science, are indistinguishable,a world heavy with time but yet bereft of hope, a world brought to life by Mr. Wolfe's unique blend of slightly archaic diction and ever-surprising vocabulary. Readers familiar with these volumes will find much to enjoy in The Urth of the new Sun.” —The New York Times