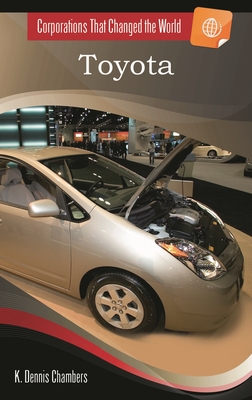 Toyota rose from the ashes of World War II to become, just fifty years later, one of the dominant automakers in the world. How did Toyota do it? How did it go from making cars that Westerners pointed to and laughed at to making cars, like the Lexus, that people now lust after? That's what this book is all about. As veteran writer K. Dennis Chambers shows, Toyota, crazy like a fox, had a long-term plan to become a top-tier player in the auto industry. Through patience, persistence, and a willingness to dream of a different future as well as to look back to the past for ideas, Toyota has succeeded step by step.

Yes, Toyota is unique. From peddling ugly 3-cylinder cars to working with quality guru W. Edwards Deming (when his U.S. countrymen thought him a crank) to totally revamping production processes, Toyota has never been afraid to chart its own path. Readers will learn what makes Toyota tick through Chambers's penetrating text, which: -Explains the importance of the company and the essential disruptions that changed business forever. (Think Prius.) -Details Toyota's origins and history. -Presents biographies of the founders and the historical context in which they launched the company. -Explains Toyota's strategies and innovations. -Assesses Toyota's impact on society, technology, processes, methods, etc. -Shows how Toyota beat the competition and wormed its way into the U.S. and European markets. -Details financial results. In addition, Chambers offers special features that include a look at the colorful people associated with Toyota, interesting trivia, a Toyota time line, a focus on products, a look at how the company treats and trains its workers, and where the company is headed. Toyota--a company that changed, and is changing, the world.

K. Dennis Chambers is Founder of Chambers Communications, specializing in advertising and marketing communications, technical writing, and business writing. He is an adjunct professor of English at NECC and corporate trainer with several national companies. He is the author of Writing to Get Action, and The Entrepreneur's Guide to Writing Business Plans and Proposals (Praeger 2007).