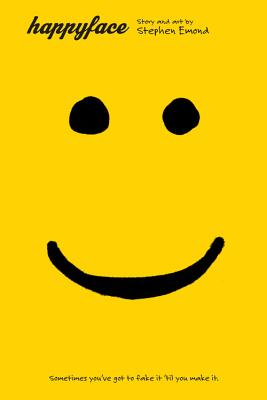 
Available in Warehouse. Wait for Email Confirmation for ETA
Cute girls dig him. He has his own fan club

But he wasn't always this awesome. He used to be Mr. Comic Book, a resident of Lonelyland. So when he swtiched schools, he slapped on a grin and went from big nerd to big shot.

Meet Happyface. This is his journal.

This unique combination of text and fully integrated art follows the journey of a dorky, quiet, artsy kid as he reinvents himself after moving to a new town, where he's nicknamed Happyface. Peek in his journal and see the world through his hilariously self-deprecating eyes as he learns to shed his comic-book-loving, computer-game playing ways. Join him as he makes new friends, tries to hide from his messy past, forgives the people who have hurt him most, and ultimately learns to face the world with a genuine smile.

Stephen Emond is the creator of Emo Boy, which ran for twelve issues and two collections with Slave Labor Graphics. He also won a national contest for his comic strip series Steverino, which ran for several years in his local Connecticut newspaper. His first novel, Happyface, was published in March 2010. You can find him at www.stephenemond.com.