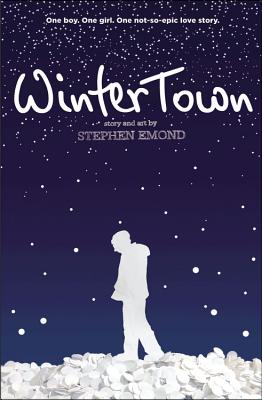 
Available in Warehouse. Wait for Email Confirmation for ETA
Every winter, straight-laced, Ivy League bound Evan looks forward to a visit from Lucy, a childhood pal who moved away after her parent's divorce. But when Lucy arrives this year, she's changed. The former "girl next door" now has chopped dyed black hair, a nose stud, and a scowl. But Evan knows that somewhere beneath the Goth, "Old Lucy" still exists, and he's determined to find her... even if it means pissing her off.
Can opposites attract? Or does growing up mean having to grow apart?

Told from two perspectives, this funny and honest novel by Stephen Emond (Happyface) is a unique combination of text, comic strips, and art. It's an indie movie in a book, perfect for the inner outcast and lovelorn nerd in us all.
Stephen Emond is the creator of Emo Boy, which ran for twelve issues and two collections with Slave Labor Graphics. He also won a national contest for his comic strip series Steverino, which ran for several years in his local Connecticut newspaper. His first novel, Happyface, was published in March 2010. You can find him at www.stephenemond.com.
Praise for Winter Town:* "Compelling, honest and true-this musing about art and self-discovery, replete with pitch-perfect dialogue, will have wide appeal."—Kirkus, starred review