Soul Full of Coal Dust: A Fight for Breath and Justice in Appalachia (Hardcover) 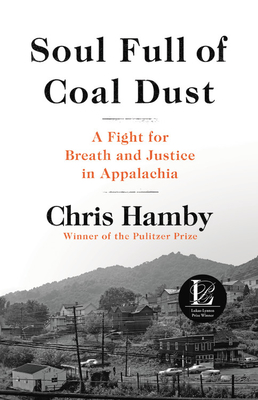 Soul Full of Coal Dust: A Fight for Breath and Justice in Appalachia (Hardcover)


Backordered - ETA Unknown
In a devastating and urgent work of investigative journalism, Pulitzer Prize winner Chris Hamby uncovers the tragic resurgence of black lung disease in Appalachia, its Big Coal cover-up, and the resilient mining communities who refuse to back down. Decades ago, a grassroots uprising forced Congress to enact long-overdue legislation designed to virtually eradicate black lung disease and provide fair compensation to coal miners stricken with the illness. Today, however, both promises remain unfulfilled. Levels of disease have surged, the old scourge has taken an aggressive new form, and ailing miners and widows have been left behind by a dizzying legal system, denied even modest payments and medical care.

In this urgent work of investigative journalism, Pulitzer Prize winner Chris Hamby traces the unforgettable story of how these trends converge in the lives of two men: Gary Fox, a black lung-stricken West Virginia coal miner determined to raise his family from poverty, and John Cline, an idealistic carpenter and rural medical clinic worker who becomes a lawyer in his fifties.  Opposing them are the lawyers at the coal industry’s go-to law firm; well-credentialed doctors who often weigh in for the defense, including an elite unit Johns Hopkins; and Gary’s former employer, Massey Energy, a regional powerhouse run by a cantankerous CEO often portrayed in the media as a dark lord of the coalfields. On the line in Gary and John’s longshot legal battle are fundamental principles of fairness and justice, with consequences for miners and their loved ones throughout the nation.

Taking readers inside courtrooms, hospitals, homes tucked in Appalachian hollows, and dusty mine tunnels, Hamby exposes how coal companies have not only continually flouted a law meant to protect miners from deadly amounts of dust but also enlisted well-credentialed doctors and lawyers to help systematically deny much-needed benefits to miners. The result is a legal and medical thriller that brilliantly illuminates how a band of laborers — aided by a small group of lawyers, doctors and lay advocates, often working out of their homes or in rural clinics and tiny offices – challenged one of the world's most powerful forces, Big Coal, and won.

“Harrowing and cinematic,” (Publishers Weekly, starred review), Soul Full of Coal Dust is a necessary and timely book about injustice and resistance.

Chris Hamby is an investigative reporter at The New York Times. He won the Pulitzer Prize for investigative reporting in 2014 and was a finalist for the prize in international reporting in 2017. He has covered a range of subjects, including labor, public health, the environment, criminal justice, politics and international trade. A native of Nashville, Tennessee, he lives and works in Washington, D.C.
"In Soul Full of Coal Dust, Hamby employs dogged investigative work and a deep well of empathy for his subjects to painstakingly bring this private pathos to life...With thorough reporting, and boundless concern for his subjects, Hamby has created a powerful document of this drama, one that is unfolding, largely unseen, in the hills and valleys of West Virginia.”
—Hector Tobar, The New York Times Book Review

“Lively and arduously researched. There are many surprising revelations in Hamby’s book. With relentless curiosity and empathy, Hamby has reached deep into Appalachia’s coal hills and discovered the bright places where change occurs. Here he has found dramas of heroism, self-sacrifice and determination. With his latest work, he has performed another public service by portraying the often-forgotten people of coal country as active agents in their own history.”
—Minneapolis Star Tribune

“Hamby has delivered… extending and enriching his reporting on the West Virginia miners with advanced-stage black lung on the brink of poverty who teamed up with his idealistic lawyer to wage battle against the coal industry. Beyond courtrooms and mines, Hamby journeys deep into hollows and homes and powerfully evokes the injustices done to miners who “battled breathlessness to make it from their front porches to their mailboxes and dragged oxygen tanks wherever they went.”
—The National Book Review

"An important story told with care and eloquence, Soul Full of Coal Dust will have you rooting for its underdog heroes and shaking your head -- and maybe even your fist -- at the coal barons and their hired guns who for decades" manipulated a rigged system to deprive injured miners of simple justice."—DanFagin, author of the Pulitzer Prize-winning Toms River

"A devastating and essential indictment of corruption in coal country."—Laurence Leamer, author of The Price of Justice

"There are two kinds
of cruelty. One you see on a face, and in the actions of a particular person.
The other you can't see unless, like Pulitzer Prize-winning investigative
journalist Chris Hamby, you uncover a hidden system-in this case of
corrupt West Virginia mine company officials, paid-off
lawyers, and lying doctors who deny ill miners and widows recompense for
unnecessary suffering and death from black lung. It's a riveting
David and Goliath story, close up and personal, and
illuminating the heroic tenacity it took two men to win a hugely
important fight."—Arlie RussellHochschild, author of Strangers In Their Own Land: Anger and Mourningon the American Right, a National Book Award finalist

“Soul Full of Coal Dust is a revelatory David versus Goliath story, this wondrous layering of history with a present-day bare-knuckles fight for justice. Chris Hamby has pulled off an astonishing feat of investigative journalism, one that left me rooting for these hard-bitten coal miners as they take on the unmoored greed of the coal companies and their minions.”
—Alex Kotlowitz, author of An American Summer, the winner of the J. Anthony Lukas Book Prize

“Under the double pressures of the climate crisis and our increasingly polarized political landscape, coal miners are often stereotyped as symbols of all that’s wrong with the nation. Through an intimate journey into the lives of miners suffering the horrific ravages of black lung, Hamby calculates the cost of a pressing scourge, and restores humanity and dignity to a group of American workers who have given their lives for American power.”
—Eliza Griswold, author of the Pulitzer Prize-winning Amity and Prosperity

“A devastating and essential indictment of corruption in coal country.”
—Laurence Leamer, author of The Price of Justice

“Harrowing and cinematic … This eloquent and sobering reminder of the human damage caused by the coal industry deserves to be widely read.”
—Publishers Weekly starred review

“Hamby’s research is extensive, and his investment in revealing the plight of
the miners and their families in the hope of reform is clear.”
—Booklist