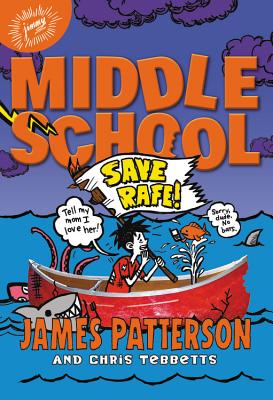 This is book number 6 in the Middle School series.

Join Rafe as he survives white-water rafting, camp counselors, and rock climbing in this hilarious New York Times bestseller from the Middle School series.
After a rough summer, Rafe is heading back to the dreaded Hills Village Middle School, the site of the very worst years of his life. And as if that's not bad enough, he's learned that he's going to be held back a year unless he can prove himself on an outdoor survival excursion-complete with dangerous white-water rafting, dizzying rock climbing, and fanatical counselors. Rafe and the rest of the pack of "delinquent" trainees are forced to cooperate as they prepare for the final test: a solo excursion in the deep woods. Can Rafe come out of the experience in one piece? And if he does, will he go home as the same insecure kid?
Both heartwarming and hilarious, Save Rafe! is a story of perseverance and courage as only James Patterson could tell it.

James Patterson has had more New York Times bestsellers than any other writer, ever, according to Guinness World Records. Since his first novel won the Edgar Award in 1977 James Patterson's books have sold more than 300 million copies. He is the author of the Alex Cross novels, the most popular detective series of the past twenty-five years, including Kiss the Girls and Along Came a Spider. He writes full-time and lives in Florida with his family.