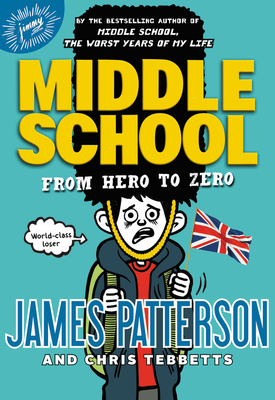 This is book number 10 in the Middle School series.

Join lovable troublemaker Rafe Khatchadorian on a trip to London, where he must cope with a bully, a secret crush, and one hilarious embarrassment after another.
After a mostly-successful stint at Hills Valley Middle School, Rafe is excited to visit the incredible city of London with his class. Sightseeing around a foreign country sounds like a blast, until Rafe finds out his roommate is Miller the Killer, bully extraordinaire! Then he's forced to work on a class project side by side with his crush Jeanne Galletta and her too-perfect boyfriend, which might be even worse than rooming with Miller.
And it's no surprise that Rafe's bad luck follows him across the pond, putting him in one crazy situation after another -- all under the watchful eye of his bad-tempered principal. Out of all of his adventures, this trip could prove to be Rafe's most embarrassing yet, undoing everything good he has going for him back home!
James Patterson holds the Guinness World Record for the most #1 New York Times bestsellers, and his books have sold more than 350 million copies worldwide. A tireless champion of the power of books and reading, Patterson created a children's book imprint, JIMMY Patterson, whose mission is simple: "We want every kid who finishes a JIMMY Book to say, 'PLEASE GIVE ME ANOTHER BOOK.'" He has donated more than one million books to students and soldiers and funds over four hundred Teacher Education Scholarships at twenty-four colleges and universities. He has also donated millions to independent bookstores and school libraries. Patterson invests proceeds from the sales of JIMMY Patterson Books in pro-reading initiatives.
Praise for Middle School: From Hero to Zero:
A New York Times bestseller!

* "As Patterson artfully weaves a deeper and more thought-provoking tale of childhood coping mechanisms and everyday school and family realities, readers are drawn into a deeper understanding of and compassion for the main characters."—School Library Journal, starred review

"A keen appreciation of kids' insecurities and an even more astute understanding of what might propel boy readers through a book.... a perfectly pitched novel."—Los Angeles Times

"It's a chatty, funny, engaging book.... filled with energetic cartoons... that will appeal to your little rebel, depicting teachers as dungeon-keepers, matadors and flying dragons. Patterson... knows how to structure a plot and builds in some surprising--even touching--twists.... Rafe is the bad boy with a heart of gold."—New York Times

"The book's... dynamic artwork and message that 'normal is boring' should go a long way toward assuring kids who don't fit the mold that there's a place for them, too."—Publishers Weekly

"Incredibly detailed and imaginative illustrations... add depth and humor.... an enjoyable story that even the most reluctant readers should enjoy."—Library Media Connection

"There is substance as well as appeal here.... Patterson deftly manages the pace of revelations that take readers deeper into Rafe's fragile trust.... Readers ready for something else in the same vein but more substantive than Kinney's Diary of a Wimpy Kid or Peirce's Big Nate should be introduced to Rafe."—The Bulletin