The Bastard Brigade: The True Story of the Renegade Scientists and Spies Who Sabotaged the Nazi Atomic Bomb (Paperback) 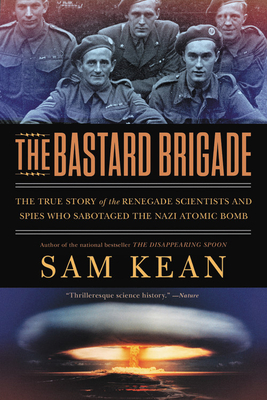 The Bastard Brigade: The True Story of the Renegade Scientists and Spies Who Sabotaged the Nazi Atomic Bomb (Paperback)


Available in Warehouse. Wait for Email Confirmation for ETA
From New York Times bestselling author Sam Kean comes the gripping, untold story of a renegade group of scientists and spies determined to keep Adolf Hitler from obtaining the ultimate prize: a nuclear bomb.

Scientists have always kept secrets. But rarely have the secrets been as vital as they were during World War II. In the middle of building an atomic bomb, the leaders of the Manhattan Project were alarmed to learn that Nazi Germany was far outpacing the Allies in nuclear weapons research. Hitler, with just a few pounds of uranium, would have the capability to reverse the entire D-Day operation and conquer Europe. So they assembled a rough and motley crew of geniuses -- dubbed the Alsos Mission -- and sent them careening into Axis territory to spy on, sabotage, and even assassinate members of Nazi Germany's feared Uranium Club.
The details of the mission rival the finest spy thriller, but what makes this story sing is the incredible cast of characters -- both heroes and rogues alike -- including:

Thrust into the dark world of international espionage, these scientists and soldiers played a vital and largely untold role in turning back one of the darkest tides in human history.
Sam Kean is the New York Times bestselling author of Caesar's Last Breath, The Tale of the Dueling Neurosurgeons,The Disappearing Spoon, and The Violinist's Thumb, all of which were also named Amazon top science books of the year. The Disappearing Spoon was a runner-up for the Royal Society of London's book of the year for 2010, and The Violinist's Thumb and The Tale of the Dueling Neurosurgeons were nominated for the PEN/E.O. Wilson Literary Science Writing Award in 2013 and 2015, as well as the AAAS/Subaru SB&F prize.
His work has appeared in The Best American Nature and Science Writing,The New Yorker, The Atlantic, the New York TimesMagazine, Psychology Today,Slate,Mental Floss, and other publications, and he has been featured on NPR's Radiolab, All Things Considered, and Fresh Air.
NPR Science Friday's Best Science Book of 2019

"A thrilling tale of
wartime derring-do meets a richly researched story of postwar intellectual
exploitation . . . . Perfect as a first foray into this period, and I defy any
reader not to be drawn into the world of unlikely spies and Nazi Nobel Prize
winners that Kean paints so vividly and infuses with such energy."—Science

"Bastard Brigadeis as entertaining as it is fascinating. Kean's colloquial expressions and metaphors provide levity to the gritty history of a world at war, with the survival of freedom, and possibly humanity, hanging in the balance. He never lets the reader forget what was at stake. . .Kean's page-turner about a still too-little-understood chapter in history deserves a prominent place in WWII collections."—Booklist, starred review

"An exciting history of the battle for
atomic supremacy during World War II. . . Throughout, Kean eschews erudite
fastidiousness for consistent action and brio. Beginning with the title, the
narrative is an engrossing cinematic drama. . . Vivid derring-do moves swiftly
through a carefully constructed espionage thriller."— Kirkus

"Riveting.... Kean has a knack for distilling chemistry to its essential elements, using stories and humor.... this is a dose of fresh air.—Library Journal

"Richly informative.... Once again, Kean proves his mettle as one of science literature's most gifted practitioners."—Booklist

"Compelling stuff, written with verve and in a style that veers between simple lightheartedness and open jocularity.... Eminently accessible and enjoyable."—Robin McKie, The Guardian

"Kean's real knack is for digging up strange details most textbooks leave out....More than an assortment of trivia, the book is an engaging history."—Allison Bohac, Science News

"A science journalist with a flair for words...[Kean's] language is fluid and accessible, even for the science-challenged."—Barbara Hoffert, Library Journal

"Kean is one of America's smartest and most charming science writers, and his new book could be perfect for summer readers who prefer some substance with their fun."—Michael Schaub, National Public Radio