Let Me Finish: Trump, the Kushners, Bannon, New Jersey, and the Power of In-Your-Face Politics (Hardcover) 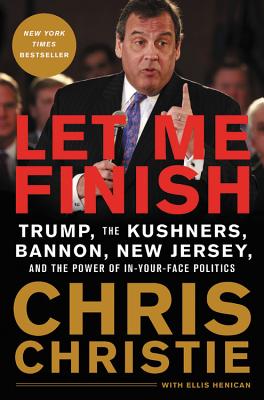 Let Me Finish: Trump, the Kushners, Bannon, New Jersey, and the Power of In-Your-Face Politics (Hardcover)


This title is likely unavailable. Email or call for price and availability.
The instant New York Times-bestselling memoir from the outspoken former governor--an "explosive" (Guardian) "must read" (Hugh Hewitt) account of Chris Christie's life in politics including his "not to miss" (Entertainment Weekly) insights into Donald Trump.
After dropping out of the 2016 presidential race, Chris Christie stunned the political world by becoming the first major official to endorse Donald Trump. A friend of Trump's for fifteen years, the two-term New Jersey governor understood the future president as well as anyone in the political arena--and Christie quickly became one of Trump's most trusted advisers. Tapped with running Trump's transition team, Christie was nearly named his running mate. But within days of Trump's surprise victory over Hillary Clinton, Christie was in for his own surprise: he was being booted out.

In Let Me Finish, Christie sets the record straight about his tenure as a corruption-fighting prosecutor and a Republican running a Democratic state, as well as what really happened on the 2016 campaign trail and inside Trump Tower. Christie takes readers inside the ego-driven battles for Trump's attention among figures like Steve Bannon, Corey Lewandowksi, Reince Priebus, Kellyanne Conway, Jeff Sessions, and Paul Manafort. He shows how the literal trashing of Christie's transition plan put the new administration in the hands of self-serving amateurs, all but guaranteeing the Trump presidency's shaky start. Christie also addresses hot-button issues from his own years in power, including what really went down during Bridgegate. And, for the first time, Christie tells the full story of the Kushner saga: how, as a federal prosecutor, Christie put Jared Kushner's powerful father behind bars--a fact Trump's son-in-law makes Christie pay for later.
Packed with news-making revelations and told with the kind of bluntness few politicians can match, Christie's memoir is an essential guide to understanding the Trump presidency.
Chris Christie is an American politician, former United States Attorney, and political commentator who served as the 55th Governor of New Jersey from 2010 to 2018. During his tenure, he chaired the Republican Governors Association and President Trump's Opioid and Drug Abuse Commission. Christie became an ABC News contributor in 2018 after leaving office.
"Part autobiography and part firsthand accounting of a presidency, the book...paints Mr. Trump as a phenom who was obviously effective as a candidate--but who has relied on the wrong people and has been ill-served by many advisers, including some members of his family.... Mr. Christie [has] lifted the curtain on some of the most explosive moments of the campaign."
—Maggie Haberman, The New York Times

"Explosive.... Exceptional as a chronicle of the score-settling and animosity that drove key decision-making in Trump's nascent presidency."—The Guardian

"The former New Jersey governor delivers plenty of jabs at political enemies.... But beneath all the record-correcting and score-settling... he offers a defense of the hyper-confrontational style that first made him famous, and later helped make Trump president."
—McKay Coppins, The Atlantic

"Stunning...intriguing.... Christie's history with the campaign means that when he talks about Trump and those around him--as he does in... Let Me Finish--we should all listen..."
—CNN "The Point with Chris Cillizza"

"Go get [Let Me Finish], you will not regret it. If you like this show, you'll like the stories he tells....Great.... A perspective from inside and outside the administration."—Brian Kilmeade, FOX News' "The Brian Kilmeade" show

"[Let Me Finish] tells quite a story."
—Andrea Mitchell, MSNBC

"Not to miss."
—Entertainment Weekly

"If you've been missing the force of Chris Christie's personality since he returned to private life last year, you can now get your fix at full blast from his autobiography, Let Me Finish...a big, loud book."—NPR Book Review

"News-making stories.... A shrewd and strategic book.... Christie defends his decisions with the gritty realism of the political professional."—David Frum, The Atlantic

"A must-read. Really, it's the best of its kind, at least the equal of any political memoir I've read.... Let Me Finish is a terrific work ... candidly honest .... Funny."—Hugh Hewitt, "The Hugh Hewitt Show"

"That rarest of books penned by a politician: one worth reading."—The Star-Ledger