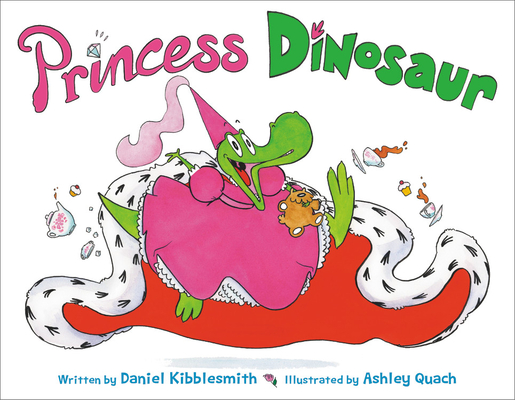 
This title is likely unavailable. Email or call for price and availability.
Perfect for fans of Princesses Wear Pants, this spirited and expectation-defying story introduces a spunky heroine who knows she can be anything she wants.
Princess Dinosaur loves wearing pink dresses and hosting fancy tea parties. But she also loves roaring and making messes. Embodying both parts of her personality to the fullest, Princess Dinosaur isn't just one thing, she's a princess and a dinosaur (and some other things, too)!
Daniel Kibblesmith is an Emmy-nominated television writer for places like Netflix, Marvel, and The Late Show With Stephen Colbert. He is the author of Santa's Husband and co-author of the humor book How To Win At Everything. In comics, he's written Marvel's Loki, Black Panther Vs. Deadpool, and others for Marvel and D.C. He was one of the founding editors of ClickHole and his humor writing can be seen in places like the New Yorker and McSweeney's. He is married to his favorite author, Jennifer Wright. Princess Dinosaur is his children's book debut.
Ashley Quach is an illustrator best known for Santa's Husband. She began in webcomics, drawing a mixture of autobio and wacky longform comics for her website, Sassquach.com. Quach is also a radio dramatist, having created the award-winning comedy podcast Deck the Halls (with Matrimony!). She lives in Los Angeles with her husband and two dogs.
Praise for Princess Dinosaur:
"An inspiring story that gently bucks gendered expectations and celebrates how multifaceted dinosaurs--and children--can be."—Publishers Weekly

"Cartoon-like illustrations done in fluorescent watercolor and pen and ink explode off the page. A rousing tale, filled with possibility, that's certain to inspire little readers, especially girls, who will be fired up by Princess Dinosaur’s larger-than-life personality."—Booklist

“Whether your princess loves dinosaurs or your dinosaur loves princesses, this Technicolor dream of a book shows it's okay to be both. In the second children's work from this writer-illustrator dynamic duo...they deftly tackle gender stereotypes.”—Entertainment Weekly