Waffles and Pancake: Failure to Lunch (A Graphic Novel) (Hardcover) 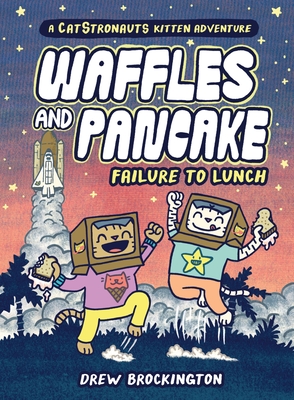 Waffles and Pancake: Failure to Lunch (A Graphic Novel) (Hardcover)

This is book number 3 in the Waffles and Pancake series.

Go back in time to when everyone's favorite Catstronaut, Waffles, was a kitten! Fans of Narwhal and Jelly will love this fun, cat-tastic early graphic novel series.

Waffles and Pancake are at Cape CatNaveral, waiting to watch a CatStronauts shuttle launch. But when the liftoff is delayed, the kittens and their family go home to pass the time. Dreaming of joining the CatStronauts one day, they decide to build a rocket themselves before a snack. Space waits for no cat! But when it doesn’t launch, Grammers may have the answer they’re looking for….and it may involve lunch.

Together the kittens launch themselves into problem-solving with hilarious creativity. Time for takeoff!
Drew Brockington has flown a Space Shuttle, repaired the International Space Station, and served in Mission Control; all during a week at Space Camp. He is the author of the CatStronauts series and the Waffles and Pancake series. He lives with his family in Minneapolis.
Praise for Waffles and Pancake: Planetary-YUM

"Fans of the original “CatStronauts” series, as well as slightly younger readers, will enjoy this Earth-bound story of these kitten characters . . . this silly, colorful tale will appeal to graphic novel enthusiasts over a wide range of reading levels."—School Library Journal

"Filled with humorous catchphrases (“That’s one small step for cats, one giant pounce for feline-kind”) and regular, enthusiastic meal breaks (the family stuffs food into their faces with comedic tenacity), Brockington’s anthropomorphic world is rendered in blocky shapes and bright colors."—Publisher's Weekly