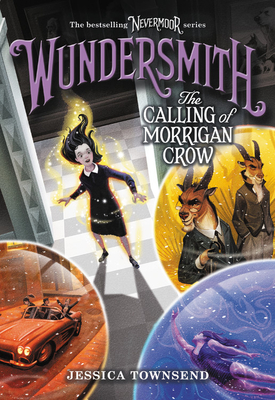 This is book number 2 in the Nevermoor series.

The captivating and heart-pounding sequel to the New York Times bestselling and #1 Kids' Indie Next Pick Nevermoor: The Trials of Morrigan Crow, as heroine Morrigan battles a new evil.

Morrigan Crow and her best friend Hawthorne Swift are now proud scholars in the elite Wundrous Society, but life is far from perfect. Does Morrigan have what it takes to prove that she belongs in the Society?

Nevermoor: The Trials of Morrigan Crow was an instant New York Times bestseller, an IndieBound bestseller and a #1 Indies Introduce Pick, with movie rights sold to Fox.
Jessica Townsend lives on the Sunshine Coast in Australia, but has lived on and off in London for a few years. She was a copywriter for eight years, and in a previous role, was the editor of a children's wildlife magazine for Steve Irwin's Australia Zoo.
Praise for Wundersmith
*"Townsend's sophomore endeavor once again fully immerses her readers in a world that intermixes the magic of the Emerald City with Howl's pithiness, Percy Jackson's humor, Coraline's darkness, and perhaps a dash of the depravity of Katniss' District One. Fantasy fans will not be disappointed."—Kirkus, starred Review

"Readers delighted by Nevermoor's zany absurdities and enchanting incongruities will welcome further peeks into this magical world...the high-stakes action will keep fans on the edge of their seats..."—Horn Book

"Townsend's skillful, suspense-filled storytelling in "Wundersmith" will keep readers entertained, as Morrigan and her eccentric classmates face a test of loyalty and bravery in what will surely be the first of many to come."—The New York Times Book Review

"Jessica Townsend lives up to the promise of her marvelous debut in this second book set in the brilliantly imagined fantasy world of Nevermoor.... Morrigan is a marvelous heroine - smart, loyal, brave, conflicted, struggling to do the right thing in a world where it's not always clear what the right thing might be. Readers will savor this latest adventure and look forward to the next one."—The Buffalo News

"Townsend offers a detailed and broadly envisioned alternate world, scenes of action and suspense, and a wide array of colorful characters; but the spotlight shines on Morrigan as she struggles with her emotions and her elusive powers."—Booklist

"Jessica Townsend's Nevermoor: The Trials of Morrigan Crow is more than just a spectacular debut. Exciting, charming, and wonderfully imagined, it's the sort of delightful, grand adventure destined to be many a reader's favorite book."—Trenton Lee Stewart, New York Times bestselling author of The Mysterious Benedict Society series and The Secret Keepers

* "Readers, like Morrigan herself, will feel at home in this evocative novel where magic and confidence go hand in hand. An excellent and exciting work."—School Library Journal, starred review

* "Readers will leap into this captivating world brimming with witty characters and unforgettable adventures. A perfect fit for fans of Harry Potter and Percy Jackson."—School Library Connection, starred review

"Townsend knows how to keep the pages turning in this fast-paced story."—Booklist

"The magical elements are well-written and clever...but the core of this novel lies in Morrigan's realization of her own value, of being a person worth attention and affection. A dark, mystical, and emotional look at a girl who has a complex relationship with magic in a sophisticated and lushly described world."—The Bulletin

"Exciting, whimsical, and colorful, this first book in a planned series will be a favorite with readers who love fantasy and adventure."—A Mighty Girl

"Whimsical and captivating.... For fans of the Harry Potter and Divergent series."—South Coast Today