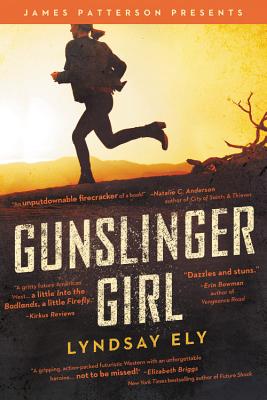 
This title is likely unavailable. Email or call for price and availability.
James Patterson presents a bold new heroine -- a cross between Katniss Everdeen and Annie Oakley: Serendipity Jones, the fastest sharpshooter in tomorrow's West.

Seventeen-year-old Serendipity "Pity" Jones inherited two things from her mother: a pair of six shooters and perfect aim. She's been offered a life of fame and fortune in Cessation, a glittering city where lawlessness is a way of life. But the price she pays for her freedom may be too great . . .

In this extraordinary debut from Lyndsay Ely, the West is once again wild after a Second Civil War fractures the U.S. into a broken, dangerous land. Pity's struggle against the dark and twisted underbelly of a corrupt city will haunt you long after the final bullet is shot.
Lyndsay Ely is a writer and creative professional who currently calls Boston home. She is a geek, a foodie, and has never met an antique shop she didn't like. Gunslinger Girl is her debut novel.

James Patterson has had more New York Times bestsellers than any other writer, ever, according to Guinness World Records. Since his first novel won the Edgar Award in 1977 James Patterson's books have sold more than 375 million copies. He is the author of the Alex Cross novels, the most popular detective series of the past twenty-five years, including Kiss the Girls and Along Came a Spider. He writes full-time and lives in Florida with his family.
Praise for Gunslinger Girl:
A Seventeen Magazine Best YA Book of 2018!A Winter 2017-2018 Indie Next PickAn Amazon Best Book of the Month - January 2018A Barnes & Noble Best Book of the Month - January 2018

*"Dirty politics has its grip in this Western-like dystopia... [Ely] leaves the door ajar for Pity's return--and it would be a dang shame if she has ridden permanently off into the sunset."—Bulletin for the Center for Children's Books STARRED review

"Debut author Ely brings to life a gritty future American West... a little Into the Badlands, a little Firefly, a whole lot to say about how right and wrong so often borrow from each other."—Kirkus

"Ely's Gunslinger Girl is as thrilling as a three-ring circus, and just as hard to look away from. With an intricately woven plot of political intrigue and characters so vivid that they vibrate off the page, it's an unputdownable firecracker of a debut. Readers will be left hungry for more!"
—Natalie C. Anderson, author of City of Saints & Thieves

"A gripping, action-packed futuristic Western with an unforgettable heroine--Gunslinger Girl is not to be missed!"—Elizabeth Briggs, New York Times bestselling author of Future Shock

Equal parts futuristic dystopia and gritty western, Gunslinger Girl is genre-bending at its finest. Much like the theater in which her sharpshooting heroine performs, Ely's debut dazzles and stuns.
—Erin Bowman, author of Vengeance Road and Retribution Rails

"An action-packed, thrilling read in an exciting, genre-bending book. Ely introduces readers to a dystopian wild west that is brilliantly imagined...a plot full of surprises, temptation, betrayal, and, of course, shootouts will be a welcome addition to the dystopia bookshelf."—VOYA