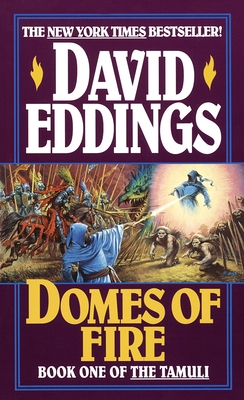 This is book number 1 in the The Tamuli series.

Danger stalked Queen Ehlana’s realm. It began with peasants whispering that the bloody heroes of old would rise again. Soon outlaw bands were ravaging the hill country, while the Trolls disappeared from their icy northern haunts—and none could say where they had gone.

Then came an ambassador from the far-off Tamul empire, begging aid. Monsters, ancient warriors, and foul magics were tearing their empire apart. Sparhawk, Ehlana’s champion and Prince Consort, was the Emperor’s last hope, for surely the knight who had killed the evil God Azash could prevail against the terror in Tamuli.

Thus did Sparhawk and his Queen begin the perilous trek to the far-distant empire of the east. With them journeyed a handful of trusted companions: the stalwart champions of the four Militant Orders, the knight Berit, Mirtai the giantess, Princess Danae, and the young thief Talen.

At the journey’s end waited a glittering court seething with corruption, treachery—and the greatest danger Sparhawk would ever face!
David Eddings (1931-2009) published his first novel, High Hunt, in 1973, before turning to the field of fantasy with the Belgariad, soon followed by the Malloreon. Born in Spokane, Washington, and raised in the Puget Sound area north of Seattle, he received his bachelor of arts degree from Reed College in Portland, Oregon, in 1954, and a master of arts degree from the University of Washington in 1961. He served in the US Army, worked as a buyer for the Boeing Company, and was both a grocery clerk and a college English teacher. He lived in Nevada until his death, at the age of 77.