Shining Ones (The Tamuli #2) (Mass Market) 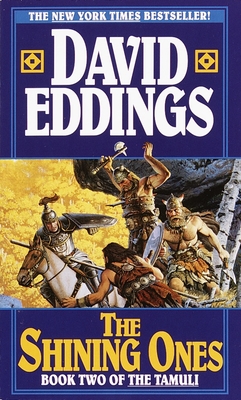 Shining Ones (The Tamuli #2) (Mass Market)

This is book number 2 in the The Tamuli series.

Years past, the Child-Goddess Aphrael had hidden Bhelliom, the Stone of Power. It rested at the very bottom of the deepest ocean, that nevermore should its awesome power sing temptation to mortal men.

Then a menace arose, a malign force wielding incomprehensible destruction across all the lands. To halt that force of evil, Sparhawk, knight and queen’s champion, set out to retrieve the sapphire rose from its briny sleep—even as his foes sought the gem for their own diabolical ends. Sparhawk and his loyal companions must find the Stone and safeguard it, both from those who sought to steal it and from the horrors those evildoers had already loosed upon the world.

The most feared of all the monsters that terrorized Tamuli were the Shining Ones: dreaded, glowing beings whose mere touch could melt human flesh from bone. All too soon, Sparhawk and his companions found themselves stalked by those fell creatures out of myth. For the Shining Ones, too, had designs on Bhelliom—designs that would change the very shape of the world. . . .
David Eddings (1931-2009) published his first novel, High Hunt, in 1973, before turning to the field of fantasy with the Belgariad, soon followed by the Malloreon. Born in Spokane, Washington, and raised in the Puget Sound area north of Seattle, he received his bachelor of arts degree from Reed College in Portland, Oregon, in 1954, and a master of arts degree from the University of Washington in 1961. He served in the US Army, worked as a buyer for the Boeing Company, and was both a grocery clerk and a college English teacher. He lived in Nevada until his death, at the age of 77.