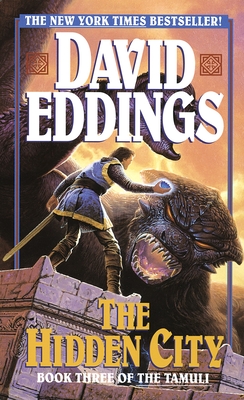 This is book number 3 in the The Tamuli series.

Sparhawk’s epic quest comes to a riveting conclusion in Book Three of The Tamuli.

The Pandion Knight Sparhawk had bested the massed forces of the God Cyrgon upon the field of battle. But victory turned to ashes when the foul God’s minions kidnapped Sparhawk’s wife, the beautiful Queen Ehlana. Sparhawk must surrender Bhelliom, the awesome jewel of power—or Ehlana would die.

But Cyrgon’s lackeys had misjudged their foe. Sparhawk fought on, and none of his companions flinched from the awesome struggle, though each must vanquish forces of evil from Tamuli’s dark past, and from fetid places beyond human ken.

Still, the full magnitude of their peril was yet to be revealed . . . Cyrgon had dared the unthinkable: He had called forth Kleal, Bhelliom's opposite, to rend the very world asunder. Thus, as it had ever been decreed, would Bhelliom and Kleal contend for the fate of this world—even as the man Sparhawk must finally face the God Cyrgon, in mortal combat and alone . . .
David Eddings (1931-2009) published his first novel, High Hunt, in 1973, before turning to the field of fantasy with the Belgariad, soon followed by the Malloreon. Born in Spokane, Washington, and raised in the Puget Sound area north of Seattle, he received his bachelor of arts degree from Reed College in Portland, Oregon, in 1954, and a master of arts degree from the University of Washington in 1961. He served in the US Army, worked as a buyer for the Boeing Company, and was both a grocery clerk and a college English teacher. He lived in Nevada until his death, at the age of 77.