The Complete Making of Indiana Jones: The Definitive Story Behind All Four Films (Paperback) 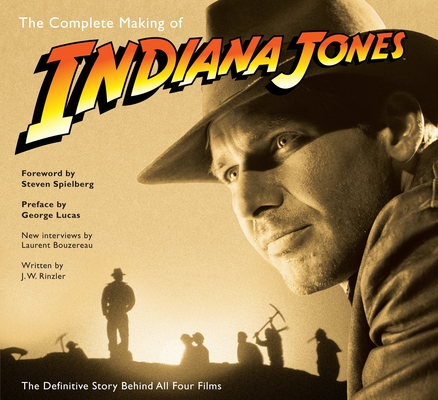 The man with the hat is back–in the definitive behind-the-scenes look at the Indiana Jones epic action saga.

When George Lucas and Steven Spielberg put their heads together to create a no-holds-barred action-adventure movie, bigger-than-life hero Indiana Jones was born. The rest is breathtaking, record-breaking box-office history. Now comes an all-new Indiana Jones feature film: Indiana Jones and the Kingdom of the Crystal Skull. Here’s your chance to go on location for an up-close, all-access tour of the year’s most eagerly anticipated blockbuster, as well as the classics. The Complete Making of Indiana Jones is a crash course in movie magic-making–showcasing the masters of the craft and served up by veteran entertainment chroniclers J. W. Rinzler and Laurent Bouzereau. Inside you’ll find:

• exclusive on-set interviews with the entire cast and crew of Indiana Jones and the Kingdom of the Crystal Skull, including Harrison Ford, Shia LaBeouf, Cate Blanchett, Ray Winstone, and John Hurt–plus director Steven Spielberg, executive producer George Lucas, screenwriter David Koepp, and the incredible production team that built some of the most fantastic sets ever.

• hundreds of full-color images–from storyboards, concept paintings, and set design schematics to still photos from all four films with candid action shots of the productions in progress

• never-before-seen artwork and archival gems from the Lucasfilm Archives

Don’t miss the thrilling new movie or this definitive making-of opus. It’s as essential to fans as that trusty bullwhip is to Indy!

J. W. Rinzler, executive editor at Lucasfilm Ltd., is the author of the New York Times bestseller The Making of Star Wars, as well as The Art and Making of Monster House and Creating the Worlds of Star Wars, which he co-authored with visual effects supervisor John Knoll. J. W. Rinzler lives in Petaluma, California.

Laurent Bouzereau is an award-winning documentary filmmaker and author. Born in France, he now lives in Los Angeles, California.