Smokin' with Myron Mixon: Recipes Made Simple, from the Winningest Man in Barbecue: A Cookbook (Paperback) 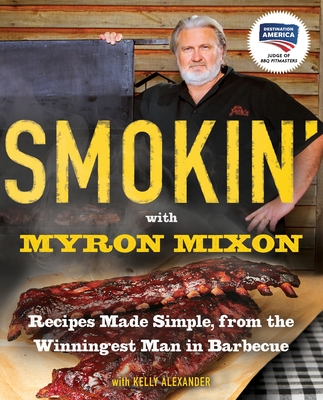 Smokin' with Myron Mixon: Recipes Made Simple, from the Winningest Man in Barbecue: A Cookbook (Paperback)


Available in Warehouse. Wait for Email Confirmation for ETA
The winningest man in barbecause shares the secrets of his success. Rule number one? Keep it simple.

In the world of competitive barbecue, nobody’s won more prize money, more trophies, or more adulation than Myron Mixon. And he comes by it honestly: From the time he was old enough to stoke a pit, Mixon learned the art of barbecue at his father’s side. He grew up to expand his parent’s sauce business, Jack’s Old South, and in the process became the leader of the winningest team in competitive barbecue. It’s Mixon’s combination of killer instinct and killer recipes that has led him to three world championships and more than 180 grand championships and made him the breakout star of TLC’s BBQ Pitmasters.

Now, for the first time, Mixon’s stepping out from behind his rig to teach you how he does it. Rule number one: People always try to overthink barbecue and make it complicated. Don’t do it! Mixon will show you how you can apply his “keep it simple” mantra in your own backyard. He’ll take you to the front lines of barbecue and teach you how to turn out ’cue like a seasoned pro. You’ll learn to cook like Mixon does when he’s on the road competing and when he’s at home, with great tips on

• the basics, from choosing the right wood to getting the best smoker or grill
• the formulas for the marinades, rubs, injections, and sauces you’ll need
• the perfect ways to cook up hog, ribs, brisket, and chicken, including Mixon’s famous Cupcake Chicken

Mixon shares more than 75 of his award-winning recipes—including one for the most sinful burger you’ll ever eat—and advice that will end any anxiety over cooking times and temps and change your backyard barbecues forever. He also fills you in on how he rose to the top of the competitive barbecue universe and his secrets for succulent success. Complete with mouth-watering photos, Smokin’ with Myron Mixon will fire you up for a tasty time.
MYRON MIXON was quite literarily born to barbecue. Raised in Vienna, Georgia,
his father Jack owned a BBQ restaurant which Myron helped run. His parents
started selling Jack's Old South BBQ Sauce, and after his father died in 1996,
Myron thought that by entering competitions he could sell some sauce. He was
hooked. He has appeared on the Today show, The Tonight Show with Jay Leno,
and the Late, Late Show with Craig Ferguson. KELLY ALEXANDER is a former
editor at Food & Wine and Saveur magazine, and her work has appeared in the
New York Times, the New York Times Magazine, Gourmet, and Newsweek,
amongst others. She also teaches food writing at Duke, and is a graduate of
Northwestern's Medill School of Journalism.
"So much has been made of Barbecue as a ‘cuisine’ that many people have forgotten the simple steps and the classic skills it takes to make good, old-fashioned, melt-in-your mouth 'Cue. Luckily Myron Mixon is here to remind us."—Adam Richman, host of Travel Channel’s Man v. Food and author of America the Edible

“Pitmaster Myron Mixon is an American treasure and holds the keys to the Barbecue Kingdom.  There is not another person who has won more championships, with more knowledge or with such passion about Barbecue than this southern gentleman.”—Art Smith, James Beard Award Winning Chef

"This is an amazing book! It is a must own if you make ribs once a year or you barbecue when the snow has to be shoveled off your smoker at 10 below. It’s a history of barbecue, has some of the best photos of barbecue I have ever seen, a biography of Myron, and most importantly to us amateurs and lovers of the art of barbecue, an amazing cookbook. Myron has won more awards than I have platinum records so it will be no surprise when he is inducted in to the "Barbecue Hall of Fame."—Joe Perry, Aerosmith