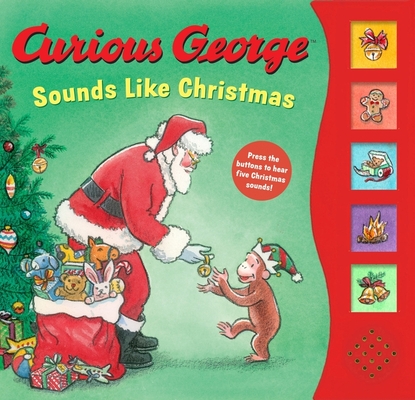 
Available in Warehouse. Wait for Email Confirmation for ETA
Whether you’re sitting by the fire, wrapping gifts, or dashing through the snow, join Curious George for all the fun—and sounds!—of the Christmas season in this interactive board book with five holiday sounds.

Bells are jingling, carolers singing . . . it sounds like Christmastime! Whether he’s taking a sleigh ride, wrapping presents, or sipping from a cup of hot chocolate, George enjoys the sights and sounds of the holiday season. Now you can join him in celebrating this special time of year with this festive sound book featuring five sounds that will fill your heart with Christmas joy!

Hans and Margret Rey created many books during their lives together, including Curious George, one of the most treasured classics of all time, as well as other favorites like Spotty and Pretzel. But it was their rambunctious little monkey who became an instantly recognizable icon. After the Reys escaped Paris by bicycle in 1940 carrying the manuscript for the original Curious George, the book was published in America in 1941. More than 200 Curious George titles followed, with 75 million books sold worldwide. Curious George has been successfully adapted into a major motion picture and an Emmy-winning television show on PBS.